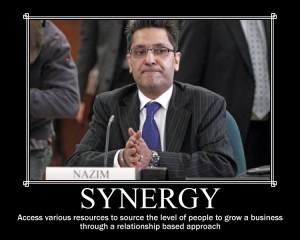 The Globe and Mail‘s story on Nazim Gillani’s testimony to a parliamentary committee investigating the Guergis/Jaffer fiasco contains all sorts of fun tidbits.

Rahim Jaffer, Noted Businessman Who Is Smart, says he wouldn’t touch Nazim Gillani with a bargepole:

“We realized very quickly after a few meetings with him that our firms were very divergent, that we had no synergies where we could develop a relationship, so that exploration ended at that stage,” Mr. Jaffer said.

“If you are a businessman who is smart, you don’t jump into bed with anyone immediately. You take the time to learn about them, and if you find there is no synergy, you leave them in good nature and you don’t work with them. That is what happened with Mr. Gillani,” he said.

Ah, but Gillani has a bunch of recent emails and signed contracts that say different, and the contract explicitly touts “connections” with government departments and ministries as being “valuable”:

In the contract, signed by Mr. Glémaud, Green Power Generation states that “it is in ongoing dialogue with, and has valuable connections to and with, the government of Canada and various departments, ministries, and wholly or partially owned entities thereof.”

The whole story is worth reading here, along with the Globe‘s live-blog of Gillani’s testimony.

Bonus round: notice the hilariously vague, semi-grammatical corporate slogans on Gillani’s website, including “Assisting companies identify and access various resources which they may be unaware of,” and “A relationship based approach makes it possible to source the level of people required to successfully grow a business.” Businessmen Who Are Smart are always looking to Access Various Resources through a Relationship Based Approach, but perhaps “Being Married To A Sitting Cabinet Minister” isn’t quite what those motivational posters were implying.