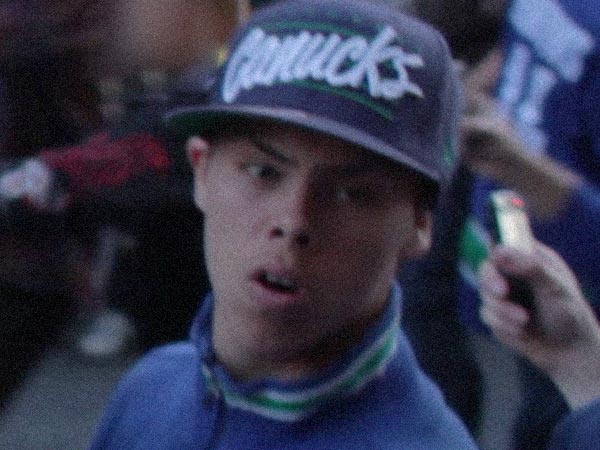 A suspect wanted for questioning by Vancouver police following the June 2011 riot that erupted after the Vancouver Canucks lost the Stanley Cup playoffs. The law is still grappling with how to track crime in the age of social media and ubiquitous cell phone cameras. Image courtesy Vancouver Police.

After the sheer surprise of Vancouver’s Stanley Cup riots had dissipated, Canadian commentators tried to figure out what it all meant. Most beat their usual political drums—months later we’re blaming the pinko anarchists, capitalist pigs, and beer companies for making their products so darn tasty and portable.

But this being 2011, many who broke windows with one hand held camera phones in the other. And as myriad pictures and videos of the event began to circulate, another worrying spectre emerged: social-media vigilantism. Images of those involved in violence and property damage spread quickly around the Web, often with the explicit intention of shaming, catching, and even punishing the perpetrators with acts of “citizen justice.”

“We have seen Big Brother and he is us,” portentously intoned social-media expert Alexandra Samuel to the Globe and Mail. And really, who could blame her? Anyone who has ever taken public transit or gone to a movie knows our fellow Canadians can’t always be counted on to be fair, or even terribly nice. But if our mistakes and trespasses used to be judged by the mostly neutral bodies of the State, this new technology means we now run the risk of being tried and even convicted by the body politic.

This speaks to a phenomenon increasingly difficult to ignore, as centuries-long practices of law and social norms, whether privacy, ownership, knowledge, or even statecraft, are threatened by new technologies. These are worrying prospects to be sure, partly because they’re just so new. But here’s a radical idea: rather than throwing up our hands, or simply calling for the use of less technology, we need to spend time thinking about how we will reshape our legal and social institutions to deal with the inevitable change that is on its way. To protect the relative freedoms of liberal society, we need to build policing of technology right into our legal structures.

After all, it’s not as if what we’re experiencing now doesn’t have some precedent. Take the telephone, for example. Though it was an incredible leap forward in communication, it also presented the rather sticky problem that your communication could be recorded and put to unintended ends. Similarly, having a point of communication in your home meant that people could contact you at any time, whether you happened to be eating dinner or not.

Our legal structures responded by enforcing laws about the conditions under which telephone calls could be made, recorded, and submitted for evidence in a legal trial. Maybe just as importantly, we also developed social strictures around the phone, including general rules about appropriate times for calling and the right way to answer. Like most social norms, some people follow them and some don’t, but at least legally speaking, our rules around the telephone generally seem to work.

What we need, then, is a similarly measured response that institutes civic and legal codes for how surveillance technology can be used, whether that is encouraging social sanction for inappropriate use, or articulating under what circumstances public footage can be submitted for legal evidence. In the same vein, it would also mean the legal system has to deal with the dissemination of information for vigilante purposes, and ratchet up consequences for those who take the law into their own hands. It would involve the tricky process of the law considering intent and context, but given the different degrees in murder charges and Canada’s hate-crime laws, that kind of legal subtlety seems to make our system better, not worse.

Implementing these changes will take decades, not years, because the changes here are huge, involving how the State exercises its authority, but also how we as members of a society relate to one another. Yet the purpose of the legal system has always been to police out those two aspects of our lives. And rather than only decrying the downsides of mob mentality, the unfettered exchange of private information or the Web’s detrimental impact on established business, we need to think about preserving the good in this new technology.

Because there’s another worry looming here too, and it also is about historical precedent. In the 19th century, the rise of printing technologies and cheap reading materials drastically altered how ideas were spread. The State responded by instituting literary study into the then-new school curriculum so that the young might “learn to read properly.” Certainly, there were upsides: national cohesion, shared values, and proscriptions against anti-social behaviour. But it also meant that the radical element was contained and made safe, as youth were taught to think usefully, not dangerously.

We sit at the cusp of a similar moment in the history of information, and it’s certainly true that it occasionally feels like a riot— out of control and of our very basest nature. The fitting response, then, is much like the delicate dance of riot-policing done right: a reaction that enforces some order on chaos, while still protecting the rights and privileges such acts are meant to restore.