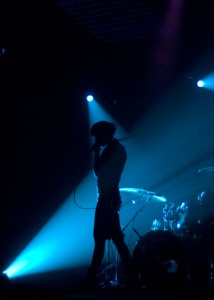 As the weather warms up it seems the nation’s music industry is collectively waking up from a wintertime hibernation. Although based on the sheer volume of new releases slated for the next few months it looks like rather than sleeping, the time was spent locked in various recording studios—which is good news for all of us.

This week’s edition of Tuesday Tracks includes two hot-off-the-presses numbers from two highly anticipated releases and one swoon-worthy duet that is bound to leave you in awe.

First up: Crystal Castles‘ new LP was originally scheduled to be released in June, but after it was leaked, the label immediately put the album out on iTunes and bumped up the physical release to May 25. The new self-titled album is full of angry electronic anarchy, punctuated with brief glimpses of beauty. Check out “Doe Deer” for a little of that anger:

Second: Plants and Animals should be one of Montreal’s most famous exports. Their first album, Parc Avenue, was a near perfect collection melodic psychedelia and their latest, La La Land, builds on those same grandiose quirks to remarkable success. The first track, “Tom Cruz,” is blanketed with a wonderful paranoia that can’t help but draw you in.

Finally: Islands in the Stream. The tune, penned by the Bee Gees and made famous by Kenny Rogers and Dolly Parton, is completely reinvented here by two of Canada’s finest: The Constantines and Feist. It speaks for itself, haunting: