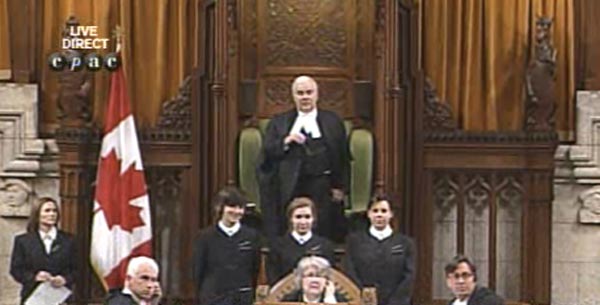 …On analysing the evidence before it and the precedents, the Chair cannot but conclude that the Government`s failure to comply with the Order of December 10, 2009 constitutes prima facie a question of privilege. […] I will allow House Leaders, Ministers and party critics time to suggest some way of resolving the impasse for it seems to me we would fail the institution if no resolution can be found. However, if, in two weeks’ time, the matter is still not resolved, the Chair will return to make a statement on the motion that will be allowed in the circumstances.

Thus begins two weeks of victory-declaring, midnight BlackBerrying, editorializing, and horse-trading. Canadian House of Commons Speaker Peter Milliken ruled in his speech to the house this afternoon a bunch of important things:

Milliken, however, decided to give everyone two weeks to see if they can sort it out amongst themselves before putting it to that contempt vote. What’s going to happen? Nobody knows! Should be an interesting two weeks, though.