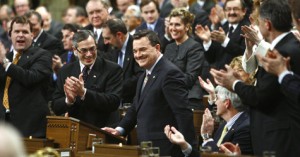 Progressive Canadians seldom get very excited whenever a Conservative government brings down a budget. More often than not, the priorities of the two groups are so wildly different that it’s almost not worth the effort to make a fuss.

Last year’s budget was a different story. Stephen Harper’s team came up with a plan of action to fight the sagging economy that was straight out of the Keynesian playbook. The massive stimulus spending pissed off hardcore conservatives and delighted their opponents. On that point at the very least, progressives were appeased.

But that was last year. This year was a different story.

Budget Day was March 4. It’s a peculiar day in Ottawa, because it’s one of the only times all year when you can find most of the city’s journalists in one place. They all gather in the Government Conference Centre, a beautiful beaux-arts structure that used to be a train station, and they pore over embargoed copies of the federal budget. It’s all very boring until the finance minister stands up in the House of Commons and delivers his speech.

That’s when the ravenous pack of journalists marches up to the Hill.

Waiting for the scribes is a group of smart people who sat in another lockup for a few hours, reading the same document back and forth for a similar amount of time. Among that group of smart people are some of those aforementioned progressive Canadians. Labour is always there, as are environmental and social justice lobbyists.

Each reads through the sections most relevant to them, so some have more reading to do than others. They come up with responses, memorize them, memorize them again, and then venture out to meet the journalists.

The chosen location: the Railway Room, which is just down the hall from the House of Commons. The two sides clash even before the finance minister sits down.

It is within this context that the progressives laid siege on the government’s plan. There was no shortage of criticism, and it came from all corners.

Sierra Club Canada’s John Bennett was among the most outspoken on Budget Day. After reading through the government’s plans for cleaning up the Great Lakes and dealing with invasive species and re-jigging environmental assessments, Bennett was furious.

“There is no intention to protect the environment,” he said. “We’re going to have environmental disasters as a direct result of this budget.”

Paul Moist, the national president of the Canadian Union of Public Employees, was happy that the stimulus spending continued. But he was disappointed on just about every other front.

“It seems to me there was a choice between investing in people and infrastructure renewal for Canada’s cities, or being fixated on the deficit. And there’s no question that they’re giving every signal that from this point forward, fighting the deficit is going to happen at all costs.”

Canadian Centre of Policy Alternatives economist David Macdonald said that compared to last year’s budget, which he called a “Liberal, verging on NDP” budget, this year’s document fails on most fronts.

“This year is a very Conservative budget,” he said. “I think this shows their longer term priorities … rock-bottom corporate tax rates, smaller government less able to plan for the future, and on the foreign policy front, it clearly means more money for defence and less money for reconstruction.”