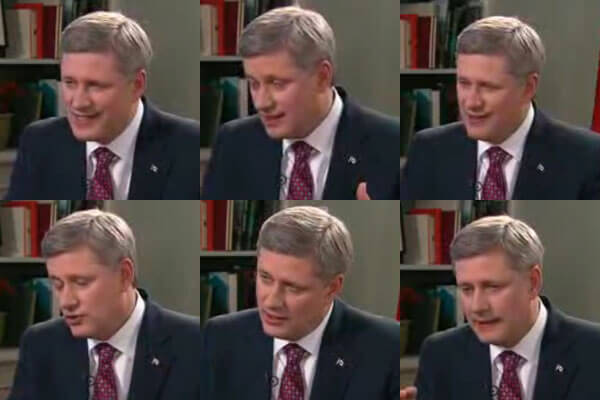 Most videos on YouTube are total fiascos, but at least they’re entertaining fiascos. Prime Minister Stephen Harper’s debut on YouTube—in which he responded with carefully prepared talking points to carefully screened video questions in a carefully pre-taped appearance—was dull because there was nothing at stake. It was like watching a man walk a tightrope across his own bathtub. But at This Magazine, we bravely suffer so you don’t have to. Here are the semi-notable bits you missed, even though you knew exactly what was going to be asked and what the answers would be. Behold!

Q: Why is the government not more open about the Afghan detainee issue?

A: Yeah, well, first of all it’s important to say I don’t agree with the premise of the question.  First of all, this, you know, this issue has been bandied around now for nearly four years.  And yet we have no evidence that Canadian soldiers have done anything wrong. […] I think our men and women in uniform and other public servants have been doing a, you know, a good job in Afghanistan under extremely difficult conditions.  I think they do deserve our support.

Q: Climate change is obviously affecting the weather here in Canada.  Is your government willing to take the strong measures necessary to adequately deal with climate change?

A: [W]e said we needed a treaty that covers all emissions, and that’s the agreement we got at Copenhagen.  Now, it’s not perfect, but at least for the first time, we have virtually every country in the world saying they will be part of an effort that will include their emissions.  So we’re obviously making commitments under that agreement, and further negotiation will go forward internationally in the next year or so to try and hammer out some more details and that. […] This is, you know, this is not an easy area.  I think what all your viewers should realize is what causes emissions is economic activity.  You know, all emissions virtually are caused by either people heating themselves or moving around or engaged in economic activity of some kind.  So to change our energy use carbon footprint over time requires the development and adaptation of a new generation of technology, and that’s what we’re trying to do.

Q: Offering families $1200 a year for childcare doesn’t even make a dent in the actual cost of childcare, and that plan, to be quite frank, is an insult to any family that actually relies on it.

A: First of all, Canadians want to make their own childcare decisions.  I think probably my own family was not a typical…we used a combination.  You know, sometimes we looked after the kids at home, sometimes we used, or part of the time we used a daycare.  We also used family members or we paid babysitters, so…and I think you’ll actually see that a lot of Canadians have a lot of different childcare needs. […] [W]e had a previous government that promised to create a national childcare system for many years.  They spent billions of dollars.  Canadian parents never saw any of that.

Q: A majority of Canadians, when polled, say they believe marijuana should be legal for adults, just like alcohol. Why don’t you end the war on drugs and focus on violent criminals?

A: I know some people say if you just legalized it, you know, you’d get the money and all would be well.  But I think that rests on the assumption that somehow drugs are bad because they’re illegal. […] The reason drugs are illegal is because they are bad.  And even if these things were legalized, I can predict with a lot of confidence that these would never be respectable businesses run by respectable people.