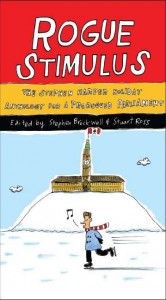 We’re kicking off our usual spring fundraising drive at This, and we’ve got a special treat this year. If you donate $100 or more, we’ll send you a copy of Rogue Stimulus: The Stephen Harper Holiday Anthology for a Prorogued Parliament as a thank-you gift from us to you. Edited by Stephen Brockwell and This fiction and poetry editor Stuart Ross, the book was commissioned, assembled, and published at breakneck speed: the contributing writers had just days to send in their poetry inspired by the prime minister’s decision to shut down parliament. Stephen and Stuart edited the collection just as fast, and Mansfield had it on the presses quickly enough that it launched on the day that Parliament convened again. There’s never been a book like it, and it’s a prickly, satirical, wry, and hilarious romp through the many responses Canadians had to proroguement. We think you’ll love it. And now by donating to This, you’ll have the pleasure of reading Rogue Stimulus while knowing you’re supporting journalism you believe in.

This Magazine relies on individual donors like you to support our brand of independent, no-compromises reporting. Magazines of all sizes are struggling, and while we’re actually in relatively stable shape, to be sustainable in the long run we need a base of subscribers and donors who believe in the magazine’s mission just as passionately as we do—and who are willing to support it financially. The kind of journalism you read in This Magazine often turns heads—but it seldom turns profits. Issues of social justice, labour, poverty, progressive economics, aboriginal peoples, queer identities, feminism, environmental sustainability, political art and the artists who make it—we commission and publish these kinds of stories because we believe they’re important. But they’re not the kind of topics (cars! makeup! celebrity diets!) that commercial magazines build their big business on. So we rely on a small but fiercely dedicated and discerning group of subscribers and donors to keep us going, because they want to read about the things that really matter too.

If you’re already one of those supporters: thank you. We literally could not do it without you. If you’re not a subscriber or donor yet, we’d love it if you’d consider taking out a subscription, making a tax-deductible donation to the foundation, or both. And if you aren’t able to do either of those things right now, that’s OK too! We make our stories available for free online because we think they need to be read, shared, debated, and responded to. Thank you for reading.

Click here to donate quickly and conveniently online. And remember, if you donate $100 or more, we’ll send you Rogue Stimulus, the most incendiary book of Canadian political poems published this generation. Now back to our regular blogging!

This Magazine is published by the Red Maple Foundation, a registered charity (charitable #: 11911 3140 RR0001). Donations over $10 are eligible for a tax receipt.