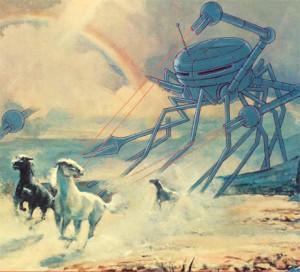 Admittedly, this week’s addition of Tuesday Tracks a little Toronto-centric. Generally, we like to ensure the cream rises from coast to coast, but the three songs selected this week were so strong it would have been tragic to bump any one of them even for a week. However, while the homebase may be Southern Ontario, the styles expand well beyond and this crop of music truly transcends physical location.

First up: “Dissembler” by Woodhands spans an evening of performances, house parties, flirting and fun. The video’s frenetic stop/start editing and stop-motion mimics the electronic energy of the song perfectly while the vocal harmonies provide enough humanity to give the song real heart.

Secondly: “Summer Sounds” by Maylee & Pegwee Power. Remember the romantic interest in that previous video? The woman with the cherubic smile? That’s Maylee Todd and when not lending her smile (and voice) to Woodhands, she is busy channelling her Pegwee Power–a supernatural, alien psychadelic force—all to our benefit.

Finally: “Childman” by Mantler. Mantler is the neo-soul alter-ego of mild mannered Chris A. Cummings. A kind of quiet superhero with a gentle rasp and the power to punctuate his voice with a brass band. He has the demeanor and cocked eyebrow of a mad scientist and the knowing croon of a 70’s R&B icon.