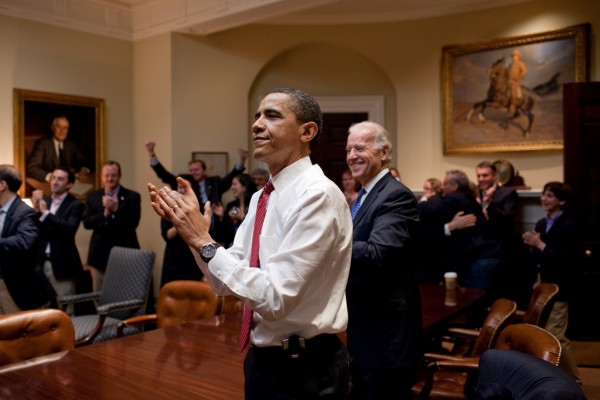 After over a year of battling it out for a universal healthcare system, President Obama has secured the (diluted) vision he intended for his country.

What, you might ask, does that have to do with Canada and climate change? Many are speculating that this victory has made it that much more probable that the President could also pass a major climate change bill. Since Prime Minister Stephen Harper’s direction on the subject has largely been to adopt whatever the American agenda is (unofficially known as the “I’ll have what he’s having” approach to climate change policy), this may mean we’re coming along for the ride.

Our prime minister has made numerous commitments to follow suit with what our southern neighbours choose to do, largely on the premise that our economy is so tightly linked to theirs that we would poorly position ourselves should we do any more or less on climate change than what the United States is committing to.

Until recently, this looked just fine for Stephen Harper, as it was not looking so good for the American climate change bill. However, two potentially key things happened this week that might affect our own climate policies: The American health care bill was passed, both reinvigorating confidence in the President and wearing down the opposition, and a compromised version of the climate change bill (worked on by the trio of senators: Democrat John Kerry, Republican Lindsey Graham, and independent Joe Lieberman) received support from both industry and environmental groups. Now key contacts are suggesting the senate isn’t up for another fight, which means there could be successful action on this bill in the near future.

Only a matter of months ago, one presumed that by hitching his wagon to the American environmental policies, Stephen Harper was avoiding having to make any action on climate change at all (and indeed his budget decisions seemed to echo this). It seemed uncertain that a health care bid would pass, and confidence in the President’s ability to address environmental issues in a tough, concrete way seemed unlikely. Both leaders had disappointed at Copenhagen, and both had neglected to address the mutual responsibility they have for Canada’s tar sands.

But there were some substantive differences between the two. While Stephen Harper has failed to re-commit to ecoEnergy, and made major cuts to climate research, the United Sates spends, per capita, 18 times as much as Canada does on developing renewable resources. Now they may be on their way to putting their money where their mouth is, if this climate change bill moves forward.

What remains to be seen is whether or not Harper will remain committed to following in the American footsteps now that they seem poised to make some progress. Perhaps President Obama can help grease the wheels by making another friendly wager—in this country, a box of Timbits and a two-four of Molson can go a long way for encouragement.