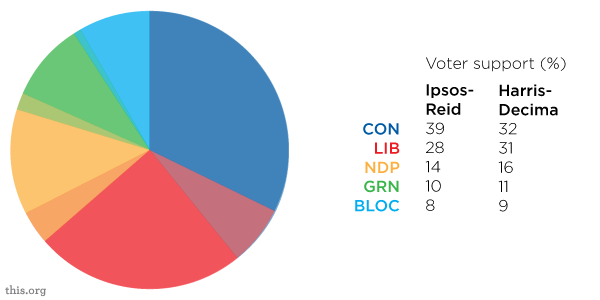 Harris-Decima says the Tories and the Liberals are in a “dead heat.” Ipsos-Reid says the Conservatives “have leaped to a strong lead.” They can’t both be right, which likely means neither of them are. But this kind of thing gets trotted out by big media (and small) all the time, the perfect non-news news story for the dying, dull days of August. The Liberals are “gear[ing] up for fall election” in one story, but Michael Ignatieff is also “dispel[ling] election rumours.” In short, if there’s an election (which no one knows) then no one knows that the hell is going to happen.

The party leaders are meeting around this time to horse-trade and try to angle for their agendas in the fall session, and then coming out of their meetings with the prime minister to give partisan but essentially non-committal statements about whether they will (or won’t!) support Stephen Harper’s minority government. They speculate about the possibility of an election, but it’s the equivalent of a nauseating phone call that just won’t end (“You hang up first!” “No, you hang up!”)

There will be an election, or there won’t. We’re watching and waiting. Just like the people at Ipsos-Reid and Harris-Decima.