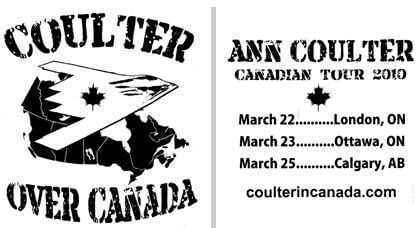 Last night, I wondered whether it was worth writing about Ann Coulter. When I think of her at all — which isn’t too often, actually — I think of her as being a deeply vile but mostly irrelevant self-promoter. (It would be going too far to call her an ideologue, because that would imply ideas, whereas her shtick is hollow invective.) Either way, she’s deeply unpleasant but I don’t really want to be part of the problem by adding to the attention she craves. Progressives — real, honest-to-god Socialists and Marxists, some of them! — frequently tie themselves in knots trying to come up with the most colourful denunciations of her, and I find it disappointing. People’s hatred of her is central to her business model, and I’d rather not donate my labour to her bottom line by participating.

The thing that most alarmed me in reading some of the news stories about Coulter’s appearance last night in London, Ont. (to be followed by Ottawa tonight and Calgary on Thursday) is not Coulter herself, it’s her audience. We know there’s an appetite out there for her brand of racist nonsense, which is clear from reading any major newspaper’s website comment sections. But writing a semi-anonymous web comment is different from showing up at a public venue and cheering loudly when the speaker tells a Muslim audience member to “take a camel” because she shouldn’t be allowed on airplanes. For a section of the populace that claims to be interested in espousing traditional social values, they seem to place a pretty low value on manners and civil interaction in public. “Respectable people,” as the prime minister called them in his YouTube appearance recently, don’t behave this way.

The creeping Tea-baggification of Canadian politics got a thorough writeup by Paul Wells last week in Maclean’s, and if you haven’t read it yet, it’s worth your time. I don’t actually believe that social conservatives have as much traction as they appear to think they do, but you can feel their influence in the country as Wells accurately describes it — moving the centre rightward and often successfully defining the terms of engagement for centrist and leftish parties. It’s deliberate, it’s a long-term political play, and people like Coulter are still part of the strategy, despite their court-jester shenanigans. Dropping their explosive rhetoric at the extremes softens the ground for less outlandish — but unsettlingly similar — characters with actual influence.