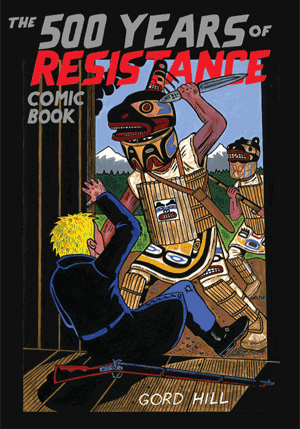 In The 500 Years of Resistance Comic Book, Vancouver-based writer Gord Hill blends his visual and literary talents to tell the story of aboriginal life since the arrival of Europeans in the Western Hemisphere in 1492. If the book’s title isn’t enough to tell you what perspective Hill, a member of the Kwakwaka’wakw nation, is taking, the names of the book’s three sections certainly will: Invasion, Assimilation and Resistance.

“Invasion” introduces readers to Columbus’ “discovering” and Christianizing the Americas, his seeing the generosity of the indigenous population as a weakness. “Assimilation” delves into the effort to create worker-consumers out of First Nations populations, the introduction of European-style housing, the Indian Act and residential schools, and ultimately the creation of a dependency in the aborignal community on state funding.

But the heart and soul of the book is its last and longest chapter, “Resistance,” in which Hill moves away from talking about the “they” and focuses on the “we” of his own First Nations identity. He chronicles the Inca Insurgency, Chile’s Manchupe, the Oka Crisis and the Zapatistas, moving right through to the struggle at Ontario’s Six Nations in recent years. It is here that Hill’s own involvement in indigenous movements becomes strong research material, translating into plain ingestible anecdotes of often ill-told or ignored histories.

The book’s plain-spokenness seems at first too stark, but its simplicity keeps it accessible and engaging. Ultimately, 500 Years of Resistance succeeds as a bold primer on colonialism and its haunting legacy today.