[This article has been updated since its January 2011 publication; please see 3rd paragraph] 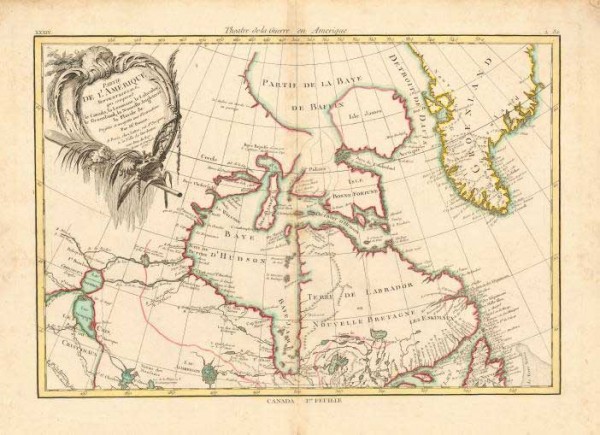 A partial map of Canada's North, c. 1776. Province-like powers are needed to improve living conditions, but only if the negotiations are fair.

Territorial devolution is key to a successful North…

After decades at a frozen impasse, it appears the federal government’s position on devolving province-like responsibilities and powers to the Northwest Territories has finally thawed. In October, a draft agreement-in-principle between the feds and the territorial government was leaked to media, marking the NWT’s first small step toward taking control of its own land development, administration, and natural resources.

The potential benefits are huge. The territorial government estimates that over the last five years, more than $200 million in resource revenues flowed out of the territory to Ottawa. Had this money remained in the territory, it would have provided much needed funding to fight longstanding social and housing problems, which are major root causes of the NWT’s embarrassing crime rate, currently six times the national average. Plus, a devolution deal would likely move north hundreds of jobs that are now located in the south. Even a few jobs would substantially boost the territory’s poorest areas, says MLA Tom Beaulieu, who represents the tiny towns of Fort Resolution and Lutselk’e. “There would be a lot more money circulating,” he told the CBC, “and employment rates would be a lot better.”

…but not without aboriginal inclusion

Not so fast, say aboriginal governments. When news of the deal leaked, their opposition was loud, immediate, and nearly universal. Surprisingly, they’d been omitted from the bilateral negotiations; unsurprisingly, they weren’t happy about it. Many fear the agreement could transfer authority over their traditional lands to the territorial government. Of the seven groups currently party to the deal, only one has stated its support: the Inuvialuit, whose land claim encompasses the oil-rich Beaufort Delta. UPDATE: the agreement in principle was signed on January 26, 2011 by the federal and territorial governments and the Inuvialuit Regional Corporation; the other aboriginal governments did not sign and said they opposed the agreement.

Territorial officials won’t say whether they’ll continue without aboriginal support or with only a majority on board, like the Yukon did in 2003. In the meantime, Premier Floyd Roland has tried to circumvent opposition by telling aboriginal groups there is nothing legally binding within the agreement. Roland maintains the draft agreement, which he calls “a road map for future negotiations,” won’t negatively affect land claim agreements or future settlements; aboriginal leaders have told him to can the platitudes. Despite a recent meeting with chiefs—weirdly, outside the NWT, in Edmonton—Roland has been unable to break the deadlock. With a winter of discontent looming, it looks like the road toward self determination may once again freeze over.