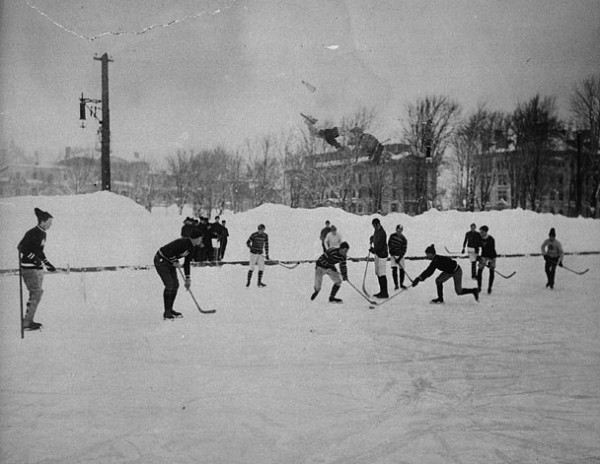 I grew up in the Greater Toronto Area, home to the most diverse region in all of Canada, perhaps the world, in a Hong Kong immigrant household (caveat: my Man U-loving dad raised me on soccer). I’m intensely proud of that fact. So it ruffles my feathers that, hockey so often precludes all other events — a men’s hockey semi-final quarter-final win over Russia (at that big sporting event that shall not be named) garnered more media and spectator attention on a day in which four medals were won in non-hockey events.

Hockey, Wikipedia tells me, is the national winter sport of Canada and has a well-known history that predates European arrival. But in modern-day Canada, the idea that the sport represents us all seems anachronistic.

I tweeted as much yesterday, saying “Heres the thing about hockey: its a rich cdn’s sport. It irks me to no end one of the least accessible games somehow represents my nat’l ID. … That, and up until recently, it was (and arguably still is) a boy’s game. It just doesn’t represent us all.” The debate that ensued seemed to strike a nerve, which you can read in its entirety here and here.

The Canada-Russia game averaged 10.3 million viewers—a third of Canada’s population. I don’t doubt the popularity of hockey, but it’s the modern incarnation of the sport that irks me.

As I tweeted earlier, it doesn’t take much to figure out that hockey runs hundreds, maybe even thousands, beyond what more “democratic” sports cost: high-performing soccer cleats run about $200, plus another $100 for jersey, shorts, socks, shin guards. Basketball: $40 ball, $150 shoes. Hockey: high-end skates can run $600 — never mind the cost of pads, sticks, helmets, pants, jerseys, neck guards and everything else.

My boyfriend, a lifelong hockey fanatic and a player in his adolescence, took umbrage with my assessment. He says in his small town in New Brunswick, almost every kid, boy or girl, played the game. If they couldn’t afford it, coaches supplied hand-me-downs, freebies or communal team gear.

True, you can still enjoy a game of outdoor shinny on hand-me-down skates and sticks. And the game itself is still a rush to watch. But we don’t live in a Tim Hortons commercial — even a rec league requires all that equipment, and from it, the hockey industry — from the $300 Leafs tickets to Bauer and Nike — generates billions of dollars from it.

For a disadvantaged Toronto kid, charity, waived fees and mentoring seems to be the only way into the game these days, the Toronto Star found, quoting NHL goaltender Kevin Weekes: “The pricing is such that our sport is becoming an elitist sport.”

Playing at a rep level and up requires several thousand in registration fees, cost for travel, and that’s not even counting the gear. All totalled? $10,000 a kid. As the Star pointed out, this leads to kids—talented ones—dropping out because of the financial burden.

Any sport that requires such a money sink is self-stratifying. It’s a terrible social phenomenon happening not just in amateur sports, but also in skyrocketing university tuition, extra fees required even in public school, laptops and other technological gadgets that are now virtually mandatory in academic and professional spheres. It also means at the highest level, the NHL, as in many other places in life, those that succeed are the ones that can afford it. It’s disheartening that all these opportunities are moving further and further out of reach of low-earning Canadians families.

In recent years, more leagues, presumably aware of this problem, have started offering bursaries to players—but I’m sure the effects are analogous to university bursaries vs. tuition freezes and reductions.

@bmo, a gentleman I was talking with on Twitter, mentioned how sports such as football institutionalize the outfitting of players—high schools supply all the equipment. An online search turned up nothing on socioeconomic statistics of incoming players in any major leagues, but I’d be interested to see if there’s any correlation between how sports are funded and who ends up succeeding. For a country whose diversity will only increase, not to mention an NHL looking for a wider audience, this isn’t a passing concern.

The difference is, no one’s calling these the national sports of Canada. When it’s put on a cultural pedestal, it demands a fairness and accessibility that befits the morals of the country it represents. I think most Canadians believe we are a fair, free and equal country. Hockey, if it ever did represent that, doesn’t anymore.

The spirit of a nation comes from its people, emblematic of their shared experience, ethnicity, history or culture. Our spirit is that we lack all these, and instead take polite pride in them all. We are not one dish, one national dress, one language, one music (I would defect if Anne Murray or Celine Dion were our national chanteuses). How, then, can Canada reduce its sport to just one?