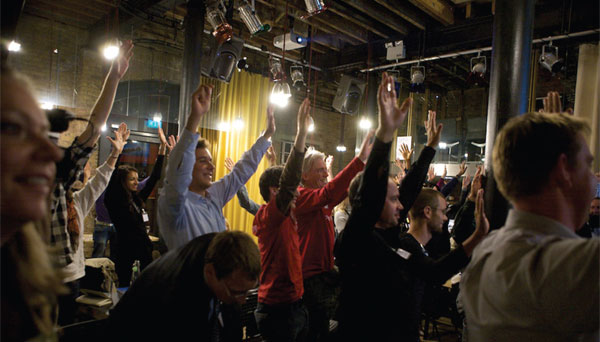 The Hub King’s Cross café in London is buzzing today with a new breed of tech geek: consumed not by robots or video games, but African development. This group, about 100-strong, are meeting at the tri-annual Africa Gathering event. And together, through what they call Information and Communication Technologies for Development, or the unwieldy acronym ICT4D, they aim to radically reshape the political and social fabric of Africa.

Traditionally, development has been hampered by the notion that since the West is richer—at least in terms of GDP—we must hold the keys for others to succeed as well. For the better of humanity, the logic goes, we must impose that knowledge on the “developing world.” But this is a twisted vision: reality shows that African communities have created sustainable survival systems that are as valid as our own. Despite what Western aid might dictate, these local systems must be given room to flourish.

By helping develop technology infrastructure in sub-Saharan Africa, there is the opportunity to ensure that those people directly targeted by aid and development make the tools and decisions they need for a better lifestyle. Cheap, adaptable and flexible technologies are key to reaching this new status. For example, African farmers have taken ordinary mobile phones and turned them into tools to check market prices to find the best bid for their products, ensuring better prices and improving their standard of living.

Building on this flexibility, organizations like Appfrica Labs invest in and support Ugandan programmers. By building on already existing technologies—primarily the radio, the cellphone and the internet—individuals bring forth programming and software ideas which can help improve the communication capacity, and in turn the livelihoods, of Ugandan communities. Status.ug, for example, is a mobile gateway for Ugandans to interact with their Facebook accounts using cheap text messages, instead of expensive mobile internet bandwidth. OhmSMS, another Appfrica initiative, alerts small business owners when their power goes back on after an outage. As CEO and founder of Appfrica Labs John Gossier explains, businesses in the Ugandan capital Kampala, where the power goes out frequently and unpredictably, lose an average of five work hours per week. With OhmSMS, instead of idly waiting for the power to come back, workers can go and run errands during the blackout.

While locally developed software is key to the African tech scene, individuals like U.K.-based Ken Banks are also creating new software with the goal of ensuring their flexibility and feasibility in areas with spotty infrastructure. His project, FrontlineSMS, is a free, open-source software platform that enables large-scale, two-way text messaging using only a laptop, a GSM modem, and inexpensive cellphones. One important use of the software so far is FrontlineSMS:Medic, a system that lightens the load on strained medical systems in Malawi and Uganda by helping doctors stay in contact with community workers by mobile phone. A hospital in Malawi using FrontlineSMS:Medic cut back transport costs by $3,500 in the first six months. Doctors no longer need to visit rural communities as often and get more time with hospitalized patients; community health workers in rural areas receive quick treatment instructions over the web.

Out of Africa’s 900 million people, only 67 million are currently online. Many people see that as a weakness, but for this group of techies, it’s the sign of a continent full of potential geeky creativity set to explode.