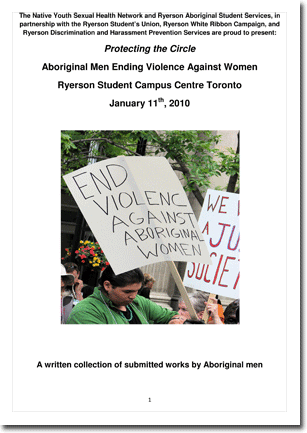 With Valentine’s Day around the corner and ladies coast to coast anticipating some special show of affection, there are alternative efforts toward female appreciation also being made.

The Native Youth Sexual Health Network has just released a collection of writing by Aboriginal men about how they can help put a stop to violence against women in their communities and abroad. A brief introduction and some interesting excerpts from the collection, titled Protecting the Circle: Aboriginal Men Ending Violence Against Women, can be found in this blog post from Racialicious.

The following poem, by a man named Walter Woodman, is included in the collection and provides a moving case for why women need to be respected and protected:

Strength is something all men want
to shed tears or have fears
is something we taunt.
To show force against mothers, sisters, girlfriends
isn’t something you do
as REAL men.
To be humble yet strong role model to others
to not only see women as things
but all of them mothers.
For without them where would we be?
no mother earth, no mothers womb
no mother you, mother me.
A woman has given you life as a gift
so respect her, cherish her
so your soul can lift.
A woman is creator
A woman is love
A woman is mother
Mother earth, and the sky above.

The unique project provides a fresh outlook on a serious issue that has been largely ignored in Canada in past decades. According to the Native Women’s Association of Canada (NWAC), over 500 Indigenous women have gone missing or been murdered over the past 30 or 40 years in Canada. Furthermore, there has been very little media attention or action on behalf of the public and the authorities to try and address the issue.

The collection has also been released just prior to a No More Silence (NMS) rally and march to generate awareness about missing Indigenous women and combat violence against these sisters. The event, which takes place in Toronto on Sunday, February 14 at noon, will start at the Toronto Police Headquarters (located at Bay St. and College St.) and will end in a free feast at the Centre for Women and Trans People at the University of Toronto. More information can be found on rabble.ca by clicking here.

It seems as though, this year, Valentine’s Day is not merely about showering one woman with chocolates and flowers, but about demonstrating a love for all women through recognition and celebration.