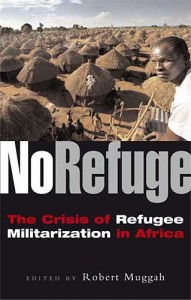 No Refuge: The Crisis of Refugee Militarization in Africa, edited by Robert Muggah.

Among Africa’s considerable problems is the pressing issue of refugees and internally displaced persons (IDPs). Armed conflicts and violence on the continent has effectively made it the foremost home of forced migrants, with the United Nations High Commissioner for Refugees (UNHCR) estimating that 3.5 million of the world’s 9.2 million refugees, and 13 of the 25 million IDPs, are in Africa. These numbers are disheartening in themselves but, put alongside the constant militarization of these displaced people, it’s a monumental problem of great urgency.

A book edited by Robert Muggah, No Refuge: The Crisis of Refugee Militarization in Africa, presents articles by a number of writers and researchers on the arming and recruitment into militias of refugees and IDPs. The authors address the ways in which displaced persons waiting longingly in their unprotected refugee camps are at considerable risk of militia recruitment, prolonging whatever conflict may be ravaging the country and region in question. The risks are high and the strategies combating them are, unfortunately, often inadequate. There are, however, as the book notes in various places, new ideas. New alliances and collaborations with a host of NGOs has established the political will to fight harder to protect these people from an ugly fate. And yet this may not be enough.

One current development the book fails to address is the phenomenon of climate refugees. Climate change and the environmental degradation it’s produced — the droughts, deforestation, crop failure, among others — has forced many Africans to seek new homes. In practical terms these people are refugees but, sadly, and inaccurately, the UNHCR does not recognize them as such — not just yet, at least. This may explain the omission in the book. It may also point to an even grimmer future than initially expected. In addition to those displaced by armed conflicts, we will now see many displaced by climate change, thereby increasing the stock of people susceptible to militarization. And, because climate change and the dwindling resources it produces will inevitably lead to conflicts, we might expect an even greater number of refugees — and militarization.

Hopefully the editor of this book and its writers will take the importance of climate change to the issue of refugees, IDPs, and militarization more seriously in the near future.It would help fill out what is an important contribution to a pressing human rights issue.