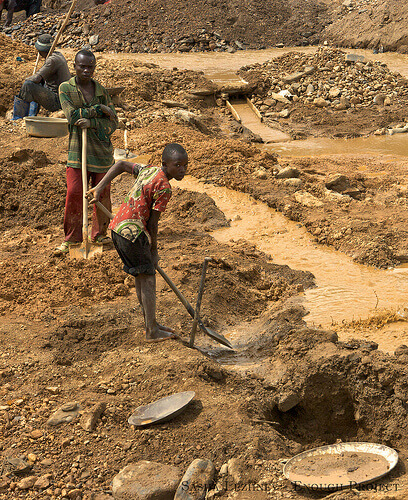 Child miners are forced to work the mines by the warring groups in the Democratic Republic of Congo. Photo courtesy: ENOUGH Project, Flickr Creative Commons.

As I type this, I am complicit in the funding of rape and war.  You probably are too–sitting on your laptop, listening to your mp3 player, texting on your smartphone–even if you don’t know it.

But that could all change with the passing of Barack Obama’s sweeping financial reform legislation by Congress in July. While the story made headlines across the United States and pundits and politicians debated its potential ability to clean up Wall Street, largely lost in the 2,300 page document was a landmark piece of U.S. legislation that is geared towards transforming a place as far removed from Wall Street as possible—the Democratic Republic of Congo, the rape capital of the world.

Tucked into the “Miscellaneous Provisions” section of the bill, the new U.S. law will require all publicly-traded and electronics companies to disclose the source of the minerals contained in their products and the steps they are taking to ensure that they are “conflict free.”

The DRC is a resource-rich nation with large deposits of tantalum, tin, tungsten, and gold, all of which can be found in every cell phone, laptop, iPod, digital camera and most other pieces of modern technology in the world. If it stores a charge, vibrates, or has gold-coated wiring, chances are it’s got these four minerals in it.  The provision, then, will affect thousands of U.S. companies, including technology giants Apple, Hewlett Packard and Dell.

Activists, U.N. experts and non-governmental organizations have become increasingly vocal about concern that armed Congolese groups—including the Congolese army, rebel militias, and groups from Uganda and Rwanda—are financing themselves with minerals from eastern Congo.  In what’s been called Africa’s World War, the DRC has been mired in violence for more then a decade.  The war began following the 1994 genocide in neighbouring Rwanda and has claimed the lives of roughly 5 million Congolese, displacing another 2 million from their homes. Hundreds of thousands of women and young girls have been raped, as soldiers on all sides of the conflict have utilized systematic sexual violence as a weapon.

As with conflict diamonds, the legislation recognizes the direct correlation between our consumer appetites and the violence plaguing the Congo. While it stops short of placing an embargo on the purchase and use of the minerals, American manufacturers must now be forthright if they do so, essentially saying: “this cell phone helped fund rape and war.”

One U.K.-based advocacy group is taking the initiative to distance our consumer goods from conflict minerals one step further. Global Witness filed suit against the British government last week for failing to recommend that U.K. companies face United Nations sanctions for purchasing conflict minerals from the DRC. UN Security Council Resolution 1857, passed in 2008, calls for a travel ban and asset freeze on all individuals and entities supporting illegal armed groups in the DRC through illicit trade in natural resources. Resolution 1896 strengthened this by calling on UN member states to bring individuals and corporations forward for sanctions.

While the British government has refused to recommend the companies accused by advocacy groups for sanctions and has disputed the evidence brought against them, it has affirmed their countries commitment to the UN resolutions and to ethical mining.

The U.S. and U.K.’s support for due diligence and ethical mining relations with the DRC—lip-service though it may turn out to be—is more then we can say for our country. Canada has not only opposed valuable mining reform but has worked to undermine the DRC itself.

Canada delayed the World Bank and International Monetary Fund’s proposed $12.3 billion debt relief for the DRC, intended to mark the country’s jubilee anniversary of its independence. The decision was delayed following a request from Canada due to a legal dispute between Kinshasa and Vancouver-based mining company First Quantum Minerals Ltd. over mining rights. The proposed debt relief eventually went through, despite Canada’s tacit opposition as the lone abstaining vote.

While Harper claims that the DRC’s transfer of operating licenses violated international law and he used the podium of the G20 to frame the blocking of debt forgiveness as his stand for good governance, the actions of Canadian mining companies in the DRC has largely gone unquestioned by our government.  A UN Security Council report on the illegal exploitation of natural resources of the DRC found that First Quantum, along with several other Canadian corporations, were in violation of OECD guidelines of ethics and that their actions had led to an “economy of war”. That the Canadian government would stand alone on the world stage and hold Congo’s debt relief in limbo in defence of the mining rights of a company found to be acting illegally to pillage the natural wealth of the DRC makes it clear that our government is closer aligned with the mining sector then the international community.

Canadian policy therefore has a vested interest in the mining sector, since Canadian companies play a major role in it globally.

But that doesn’t mean that Canada can’t follow the suit of our neighbours to the south and legislate for more ethical mining practices. When our MPs return to the House of Commons for the fall session, among the first bills on the agenda will be Private Member’s Bill C-300, the “Responsible Mining Bill.” Introduced by Liberal MP John McKay in 2009, the bill seeks to implement stricter guidelines for corporate social responsibility, to ensure that mining companies receiving funding from the federal government comply with internationally agreed-upon standards of human rights and environmental protection.

It comes down to responsibility: holding companies responsible for the goods they produce and the way they produce them. Of course, this is simply one small step to end the violence in the DRC—the war did not begin over minerals and this will not bring about its end. Every dollar in our society is a vote, though, and the the idea behind initiatives like Bill C-300 and the legislation in the U.S. is that civilian purchasing power, combined with government pressure, can enforce corporate accountability to stop funding the militarization of the region. This action is merely one in the arsenal that is required to stabilize the DRC. But it is an important one.