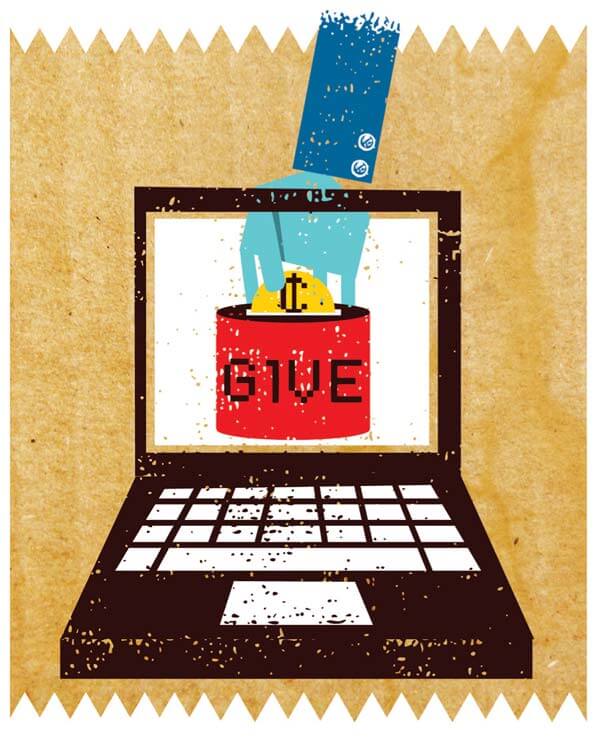 Recently, I’ve been inundated with inspiring messages and touching stories of online charitable endeavours every time I sit at the computer. Whether the bike ride to cure cancer or the drive to raise money for kids in sub-Saharan Africa, it’s been incredible to see such widespread empathy and concern. So I, like so many others, have been taking a moment from my day to click “forward” and spread that message of hope.

Oh, wait. They wanted me to donate money? It seemed so much easier to just click.

While the internet has clearly opened new avenues for generating revenue and enthusiasm for helping others, at the same time, tech-savvy activists can suffer the same problems as their for-profit counterparts. There is an uneasy feeling that, despite some success stories, all that breathless energy is creating more excitement than actual change. What’s more, lost in the energetic shuffle of social media is the threat that the Net’s culture of instant gratification and narcissism might be spilling over into real-world charity.

Talk about online activism and for many Canadians, Facebook pops to mind first. There are, after all, almost 12 million of us using the service. And I’m pretty sure that you, like me, long ago got tired of the unending requests to join groups for various causes, from the inane to the important.

One hopeful request that crossed my path this year was a group formed to protest the closing of Pages, perhaps Toronto’s most important indie bookstore. The group quickly swelled to 2,300 members and the store’s landlord granted a reprieve. Six months later, Pages still couldn’t turn a profit and the store closed anyway. For all the passion, the one thing the group couldn’t do was make a landlord put independent books above the rent. Here was online activism running smack into the cold, hard wall of the real world.

It’s a phenomenon that is unfortunately all too common. It even has a name — “slacktivism” — that Evgeny Morozov, a leading thinker on the political impact of the web, bluntly defines as “feel-good online activism that has zero political or social impact.” Peruse the top causes on Facebook and you’ll quickly find examples of what he’s talking about, like a cause called “Stop Child Abuse” that has 1.9 million members and so far has raised—wait for it— $1,500.

I ran the problem past Jane Zhang, program director of Techsoup Canada, an organization that supplies Canadian nonprofits with donated software and technology. She pointed out that while social media may lag in raising money, it does excel at getting a message out. Zhang points to “HoHOTo,” a holiday party that was organised over Twitter by some of the Toronto technorati, and eventually raised $35,000 for the Daily Bread Food Bank.

Rather than being spearheaded by the food bank itself, Daily Bread simply put out a message of need, and an affluent, privileged community responded. The event has inspired others: Vancouver’s game-developer community has adopted it as a model for their own “Ghoulash Bash” to support their local food bank. In combining both charity and fun, HoHOTo was able to overcome apathy in order to help people. As Zhang says, “People used to give out of pity, but now they give out of a sense of fulfillment.”

But the notion of fulfillment also implies a move away from selflessness, and toward a merger of pleasure and giving. Participating in web-based charity can still work, but it’s often charity seen through the lens of late capitalism: it’s about the individual, and it’s about feeling good while giving.

And, if I recall correctly, after four beers at HoHOTo, I did feel pretty great. But though it would be both naive and churlish to suggest charity must adhere to some ideal of ascetic selflessness, it seems worth questioning whether that fuzzy line between self-sacrifice and self-satisfaction has simply become dominated by the self.

In an age when oversharing reigns, part of the easy appeal of joining a Facebook group is that it immediately shows up on your profile. You don’t just feel good helping, you get to look good doing it too.

On the surface, it’s an understandable problem. In much of one’s online life, pressing buttons can quickly cause real, satisfying things to happen, whether buying a TV or arranging a party. But because that culture of immediacy and gratification has come to dominate commerce and social interaction, it doesn’t mean that it works for activism too. As Zhang warns, “What people forget is that technology is a tool, not a solution.” Right now, the power of the web to consolidate and galvanize people is being frittered away by a culture of narcissism. If the purpose of charity swings toward feeling good and away from doing good, we have a problem.

So many of us want to help and want to be a part of something. But in a time when everything, even charity, beckons us to both enjoy and express ourselves, it’s time to rethink the limits of online activism. Who knows? Maybe I’ll start a Facebook group to spread the word. I mean, it’ll only take a second.