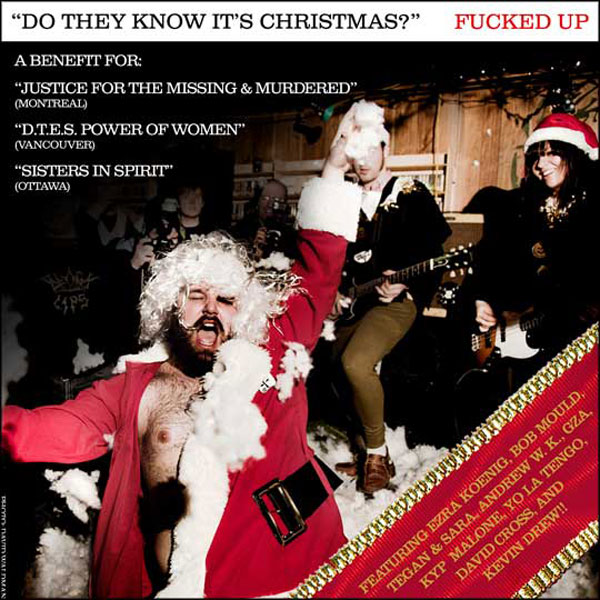 Fucked Up, winners of the 2009 Polaris Prize, this week released their cover of the seminal 1984 Bob Geldof/Midge Ure song “Do They Know It’s Christmas?,” and it’s pretty great. The band used part of their $20,000 Polaris cheque to bankroll the recording, and are donating the proceeds to three important Canadian charities: Justice for Missing and Murdered Indigenous Women in Montreal, DTES Power of Women Group in Vancouver, and Sisters in Spirit in Ottawa. The three groups together advocate for and agitate about the hundreds of murdered or missing Aboriginal women across the country; the song is 99 cents on iTunes and will be released as a 7″ vinyl single in February, apparently.

I bought mine, and Fucked Up’s cover version of the song definitely captures some of the campy charm of the original, which has lately become a bit of a punchline because of its maudlin message, the assemblage of crazy music personae out-caterwauling one another, and the tone-deaf paternalistic/neocolonialist thrust of the whole exercise. The tongue-in-cheek approach is clearly on display, with a WTF-inducing grab-bag of guest singers including Canada’s Tegan & Sara, Broken Social Scene’s Kevin Drew, Yo La Tengo, Andrew W.K., comedian David Cross, and Wu Tang Clan’s RZA. “Jingle Bell Rock” this ain’t, thank goodness. Here’s wishing everyone Happy Hardcore Holidays.

Buy it: “Do They Know It’s Christmas” by Fucked Up