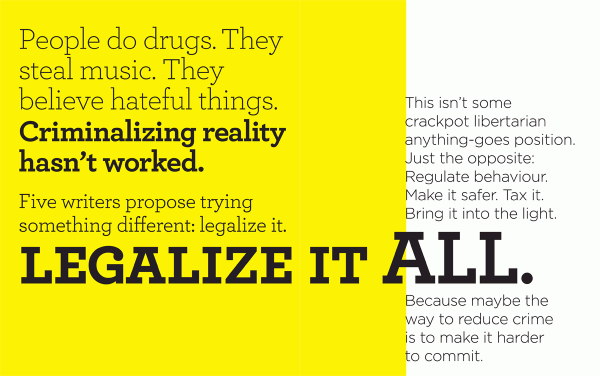 The opening spread from our special "Legalize Everything" issue. Click to enlarge.

The November-December issue of This is showing up in subscribers’ mailboxes and on better newsstands coast to coast this week, and today we’re kicking off “Legalization Week” to showcase the five stories and writers who contributed to this special issue.

Given that the boomers, a generation accustomed to getting their own way, who are watching their parents die—and not liking what they see—are starting to face up to their own mortality, we should be enjoying some momentum on this issue. We aren’t. But the Bloc Québécois’s Francine Lalonde did introduce a private member’s bill to give Canadians the right to assisted suicide. This is not the first such bill she’s sponsored and she did it knowing she has cancer. While that may mean her fellow parliamentarians have some sympathy for her personally, it won’t change the fact that private members’ bills rarely become law—and it’s not going to help her cause that the media has pretty much ignored the issue.

Well, we aren’t ignoring the issue. All this week we’ll also be posting polls like this one at the right, asking your opinion on these legalization ideas. Please do leave your comments here on the website or email your thoughts to editor at this magazine dot ca. This is all leading up to the “Legalize Everything!” party we’re throwing in Toronto on November 19. If you’re in the area, please come and meet the magazine’s staff and volunteers and bicker about these controversial notions in person.