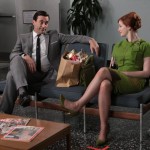 While most of Mad Men’s devoted fan base was surely whipped into a frenzy thanks to “The Big Reveal” this past Sunday, [Sorry folks, I’m going to be good and keep the spoilers behind the link] with only three episodes left this season, I’ve been noticing something other than the plot.

Technically, disability was introduced as part of the ultra-realistic, ultra-accurate Mad Men landscape in the very first season, when the neighbour kid is invited to Sally’s birthday party at the Draper house and this kid happens to be a polio survivor, walking around on old school forearm crutches.

Back then, viewers got a little taste of 1960s ableism when the mother hens started clucking around the kitchen counter: “Oh, how sad, a child with polio.”… “The father’s a real stand-up guy for sicking it out and staying with them.”…”I don’t know how they do it.” But, It wasn’t until episode 3.6 “Guy Walks Into an Advertising Agency,” when a British ad exec gets his foot run over by a John Deere during an office joyride, (don’t ask) that I really got the message that creator Matt Wiener was intentionally raising the issue as yet another cultural sticking point of the era.

Below is the scene in the hospital waiting room, once the bosses realize their rising star will have to have his foot amputated:

Joan: I’ll bet he felt great when he woke up this morning. But that’s life. One minute you’re on top of the world, and the next, some secretary is running over you with a lawnmower.

Harold Ford: One that surely could have been avoided. Mrs. Harris, thank you for your quick thinking.

Lane Pryce: You may have saved his life.

Saint-John: Such as it is. He was a great account man. A prodigy. Could talk a Scotsman out of a penny. Now that’s over.

Harold Ford: The man is missing a foot. How’s he going to work? He can’t walk.

Saint-John: The doctor said he will never golf again.

Harold Ford: I’m afraid we’ll have to reevaluate our entire strategy (referring to the reorganization of Sterling Cooper.)

Unlike many of the “isms” that Mad Men explores, ableism isn’t one where we can look back and see many inroads. I would guess there were just as many people who watched this episode, looked at their partner on the couch and said, “Isn’t that awful,” as there were those that said, “They have a point.  In the above fictional conversation, it’s suggested that the disabled man’s life is over because he can’t play golf and golf is everything in business. Well, once again, the truth is stranger.  Casey Martin is a pro-golfer who, in 2001, needed to sue the PGA for the right to use a golf cart on the PGA Tour because of his disability — that was in 2001, not 1963.

Normally, I wouldn’t spotlight a one-off episode tackling disability issues, (countless other shows have done that in the past) but the issue was revisited this week with the introduction of Don’s mistress’s brother, Danny Farrell, who feels socially shunned because of his epilepsy. His admission to Don that he’s not going to their destination to mop floors at yet another job, says it all: “People are nice enough at first, but when you come to [consciousness], having pissed your pants, people step much more gingerly.”

Anyone with a disability who has ever gone to a job interview, where perma-grins seem fused to the interviewer’s face and everything seems just a little too fine, will tell you they often wonder what those people say about them when they leave.  While there are laws now, meant to protect people like Danny from taking to the streets, unofficially, Danny’s reality of being bounced around by a society that doesn’t know what to do with him, is still very much alive today.

Ironically, 1963 was also a banner year in firming up the rights for people with disabilities. Prior to the year this season of Mad Men inhabits, things were still a lot worse.

Institutionalization was the “catch-all” answer for the severely disabled in the 60s, but at least in 1963, lead by the Kennedy Administration, legislative improvements were beginning in America. Some highlights from The Museum of Disability History Timeline can be found below: