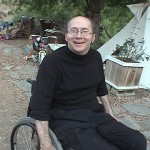 Generally if I find myself awake at four in the morning, the best thing on TV is Vince Shlomi pitching the SlapChop or Billy Mays yelling at me from beyond the grave.  But this morning, I caught an unapologetic and often uncomfortably unflinching documentary on what day-to-day life in a wheelchair is like.

Having first aired in January 2008 on PBS, Rolling gave three wheelchair-using L.A. residents the opportunity to film every moment of their lives, over the course of two years. This happened when physician and filmmaker Gretchen Berland mounted handheld cameras onto their chairs, chronicling the daily triumphs and struggles of life from a sitting position.

The first to take a camera was Galen Buckwalter a clinical psychologist, responsible for developing and validating eHarmony.com’s original matching questionnaire, who became a paraplegic after a diving accident when he was 17. The second is Vicki Elman, a former business manager at the UCLA School of Medicine until her Multiple Sclerosis diagnosis meant she was unable to work. At the time of the documentary, she was the president of Californians for Disability Rights and  advocating for a bill that would make it easier for disabled people to live at home.  The third and final person with a camera was Ernie Wallengren. A writer-producer on television shows like Little House on the Prairie, The Waltons, Baywatch and Touched by an Angel.  His camera shows how  Amyotrophic lateral Sclorosis [ALS] was slowly taking away his motor functions and eventually, his ability to breathe.

It takes tremendous courage to expose the daily struggle of disability in all its unvarnished consequence, but sometimes it’s too morose and, dare I say, too pathetic. The three subjects always seem to be smiling through gritted teeth, constantly trying to push the hard reality of their situations to the back of their minds with black humour and misdirection.

You watch Vicki struggle over the phone to get her electric chair’ battery fixed. This culminates in her chair losing power on a para-transit bus. The driver explains that dropping her off is company policy.  He abandons her in front of her door, while she cries into the camera Blair Witch style. It isn’t until it gets dark that a neighbour happens by and lets Vicki into the  house. Until then, her utter helplessness is on full display for all to see. 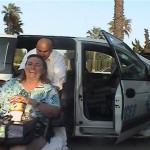 Vicki Elman champions disability rights and struggles for her own, when she films herself for Rolling--Thirteen/WNET New York

The humiliation doesn’t stop there for her.  At another time,  she falls while getting ready for the day, immobilized on the floor without pants until her neighbours and friends once again come to her rescue and, after several collective attempts, get her back into her chair. Of course, this comedy of errors is full of laughter and black humour, pointing out the ridiculousness of the situation, in that “How-did-I-ever-get-here?” kind of way. Combine this with watching Ernie Wallengren filming himself slowly succumbing to ALS, and I have a problem with this documentary.

Actually, not so much the documentary, but the sentiment it may instill in a viewing audience with limited to no exposure to people with disabilities.  Watching this, you can’t help but feel sorry for these people, and if I’m feeling this way, there’s no telling how many able-bodied people are using this as their barometer for what it’s like to live with a disability.

I don’t want my interactions, especially with women, to finish like this:

“So, if you don’t mind me asking, what, um, what actually happened to you?”

“Well, I have a disability–cerebral palsy, actually”

“Awwwww. Wow, that must be really hard. I can’t believe what you all go through.” 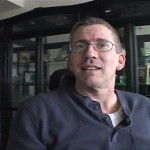 Spending so much time behind the camera on shows like The Waltons and Baywatch, Ernie Wallengren turned the camera on himself in Rolling--Thirteen/WNET New York

“Oh, you don’t have to put on a brave face just for me (insert comforting, but degrading shoulder pat here) I saw this documentary on PBS; I know your pain.”

I know that Rolling was real, but its realism doesn’t do me any favours. What able-bodied person would want to hang out with or date a person with a disability if they figured they needed to peel them off the floor, let them into their house, or watch them slowly degenerate and die? It’s just depressing.

Sure, there are things pertaining to my disability that would induce heavy sighs from those who don’t have one, but that’s why I’ve never put my daily life on film. Highlighting weakness and vulnerability has unintended consequences. Sure, it counteracts that courageous superhero stereotype that’s so popular in the media, but it keeps us down as well, propagating the mistaken belief that we’re all just a perpetually dependent, ultimately unreliable, weak link in society.

I don’t need that going to any viewing  audience—thanks a lot PBS.

Is Aaron Broverman off his rocker? Weigh-in. There’s a copy of Rolling online, for viewers like you.