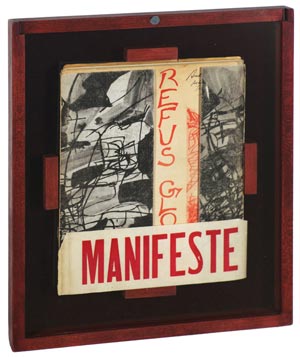 Sixty years ago, on the occasion of Quebec’s 340th birthday, the painter Paul Émile Borduas gave to his beloved home province an unusual gift: an evisceration in 14 pages, entitled Le Refus Global (Total Refusal). Written by Borduas, and signed by 15 of his students and friends — members of a group of Québécois artists known as the Automatists — the manifesto lambasted the religiosity and conservatism then ascendant in the province’s culture and called for a less provincial Quebec, one more open to international influence.

The Automatists on the sanctity of Quebec’s cultural symbols: “To hell with the holy-water-sprinkler and the tuque!”

The Automatists on the question of God: “God does not exist.”

Though only 400 copies of the book were originally printed, its impact was profound.

The painter Marcel Barbeau, a signatory, says that he did not anticipate the steep cost of his endorsement. “My family was very Catholic. My sister, my mother, they were crying all the time.” The far-right government of Maurice Duplessis had Borduas removed from his long-held position at the école du meuble, a Montreal school of design. Meanwhile, the media were barely less hostile; every day for months after its publication, newspaper articles appeared condemning the manifesto.

Still, despite formidable opposition, Borduas’ vision of a secular, liberal Quebec presaged the cultural changes that would take place in the province during the 1960s and ’70s. Currently the subject of an exhibit at the Montreal Museum of Fine Arts, his manifesto is now widely considered the Quiet Revolution’s boisterous beginning.

“A woman recently asked if my husband was the Pierre Gauvreau who had signed Le Refus Global,” recalled the painter Janine Carreau. “When I told her ‘yes’, her eyes filled with tears. “This document was permission for us to be who we are.”

Below: Artist in Montreal, a 1954 National Film Board documentary about the Automatists.