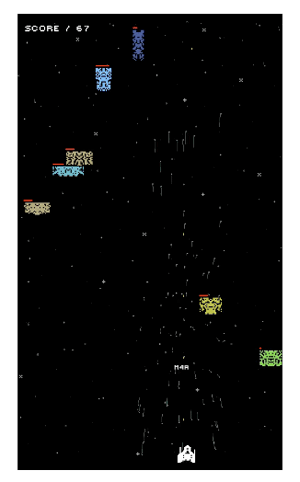 The current issue of This features Andrew Webster’s profile of Canada’s independent videogame scene, which came to mind recently when I stumbled across Lose/Lose, a video-game/conceptual-art-project that adds some real risk to the normally consequence-free world of blowing up aliens. When you play Lose/Lose, the alien attackers are stand-ins for actual files on your computer. When you blow them up, those files are deleted. If the aliens blow you up, the game deletes itself and you have to download it again. I didn’t play it, because, well, that’s not really the point. It’s a thought experiment.

Although touching aliens will cause the player to lose the game, and killing aliens awards points, the aliens will never actually fire at the player. This calls into question the player’s mission, which is never explicitly stated, only hinted at through classic game mechanics. Is the player supposed to be an aggressor? Or merely an observer, traversing through a dangerous land?

Why do we assume that because we are given a weapon and awarded for using it, that doing so is right?

That’s a pretty explicit question, and a politically charged one—the kind that videogames have traditionally avoided.

As an art form, games seem to remain ideologically inert in comparison to other media. Partly that’s a function of the cost of developing them. When you spend millions building a blockbuster game, you can’t afford to turn it into a searing commentary on morality in pop culture; stuff just has to blow up real good. That’s true of film and music too, other high-capital undertakings that can’t afford to alienate the audience. But in those fields, independent, aggressively avant-garde projects still flourish on the margins. With video games, even the tiny indie producers seldom seem to venture into serious commentary on social, political, or economic issues. It’s all “dance dance” and no “revolution.” There’s the “serious games” genre, but those seem more like educational games, and less focused on commentary.

Does anyone have suggestions for video games (any platform) that have real political content? Who is the Brecht of X-Box? The Godard of GameBoy? The Breillat of Wii? Suggest them in the comments section below or email them to editor at this magazine dot ca.