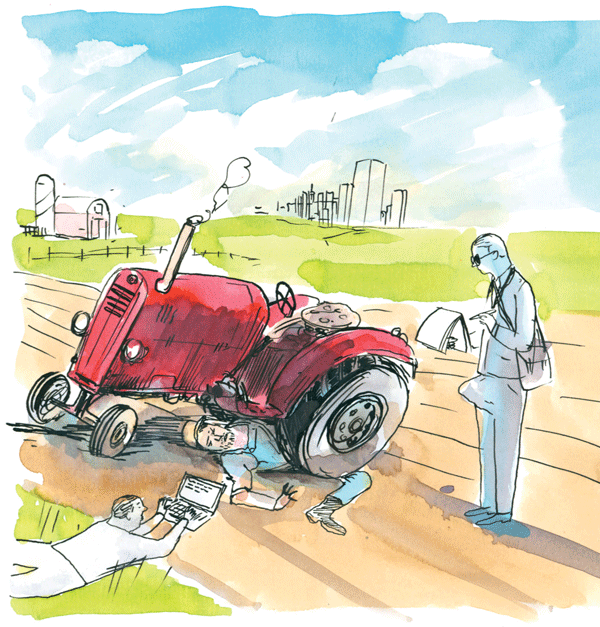 Most Canadians live in cities. Why is our literature so relentlessly rural? Illustration by Graham Roumieu.

When he delivers public lectures, editor and writer John Metcalf is fond of illustrating CanLit’s paradoxical obsession with tales of the rural past by describing the query letter he once received from a then-unheard-of Russell Smith. Metcalf claims that Smith introduced the manuscript for his debut novel, How Insensitive, by asserting something along the lines of, “You probably won’t like this because it’s a Canadian novel but it isn’t about angst on the farm. CanLit always seems to be about angst on the farm.”

Thing is, most Canadians don’t live on, or even near, farms anymore. More than 80 percent of Canadians live in cities, yet the CanLit spotlights continue to shine on rural literature, usually of yesteryear. Why?

I’m entirely confident that this fall’s big fiction awards—that rise and fall of media attention as brief and predictable as a stadium wave—will once again prefer a rural yesterday to an urban today. In his new novel, Galore, Michael Crummey is clearly showing some CanLit thigh with not just rural Newfoundland history, but multiple centuries of rural Newfoundland history. Before lamenting the prevalence of these propagandistic tales from ye olde fishing village or down in them pit mines, let me clarify that this is not another urbanite’s call for more stories of hedge funds and wine tastings. All four of my grandparents were born on Canadian family farms, and I’ve spent half of the last decade in a fishing village of 200 souls. But with publishers, big media and universities giving us one rural yarn after another, someone has to put a stopper in the maple-syrup jug.

Ex-Saskatchewan novelist Michael Helm has been quoted as saying, “There’s a sense that the ancient agrarian rhythms [of Saskatchewan] still are there, and the question for a writer is how this rhythm works its way into your writing.” Oh, please. Helm is a professor. at York, one of our biggest universities in our biggest city. Gastropubs, bureaucratese, and tenure are more likely to influence his writing than are “ancient agrarian rhythms” (whatever they are).

I wonder why book clubs of contemporary urban women who live stories of career-and-home conflict, medically enhanced (or hindered) pregnancies, and life in the post-nuclear family choose to read Ami McKay’s The Birth House, a novel about a bygone, semi-literate midwife prying rural babies out with a washboard. Previously, I’ve commented on how unpredictable book reviewing is in Canada, and our lack of reliably critical voices is one reason no one cries foul on these tales of rural fowl suppers. More indicting is the fact that setting stories for urban audiences in (a) rural areas and/or (b) the past is another Canadian example of admiring something from away. Like an offshore queen or a neighbouring superpower, the rural past is elsewhere and well known, which is all that seems required by the CanCulture establishment.

We’ve become content to tell ourselves fictions about our fiction. The Nova Scotia of contemporary fact finds 40 percent of its population living in Halifax, a city with four universities (one of them devoted to the fine arts), over half a dozen yoga studios, not one but three artist-run centres (those hotbeds of poverty, creativity and incest), and higher per capita spending on reading, the performing arts and museums than Toronto, Montreal or Vancouver. Yet the Nova Scotia stories that get publishing and media support are almost all the same: an octogenarian remembers the rural past, usually by returning to an old house. That’s exactly the plot of Don Hannah’s recent novel, Ragged Islands.

David Adams Richards moved from New Brunswick—where he still sets all his fiction—to Toronto over a decade ago, yet each new Richards novel finds another year from the past to inhabit. His fiction has the Y2K bug and can’t spin on over into this century. One-quarter the population of Newfoundland and half the population of Manitoba live in their capital cities, yet we still get one outport and farm story after another.

Sadly, the (mostly urban) study of CanLit worsens rather than corrects this preference for a literature of rural clichés over relevant ideas and lasting honesty. Far too many CanLit courses still contain Sinclair Ross’s prairie novel As for Me and My House (a lobotomy between two covers). Metcalf’s memoir Shut Up He Explained and CanLit scholar Robert Lecker’s Making It Real expose the marketing spin that sees Ross’s soporific novel perpetually described as “a Canadian classic.” If this book of dour prairie lit (excuse the redundancy) had truly sounded such a Canadian chord, why was it published in the United States and the U.K. a full 16 years before it found a Canadian publisher? Why, as Metcalf meticulously points out, were its Canadian sales so weak? Only conscription, in the form of university courses, keeps this moribund farm novel alive.

Literature’s job is to be incisive, not to be blindly contemporary, and the right voice can make any story gripping. A novel about sexting and YouTube isn’t inherently more interesting than one about muskeg and bison drives. But I for one am tired of counterfeit stories with no more heart than a provincial tourism poster.