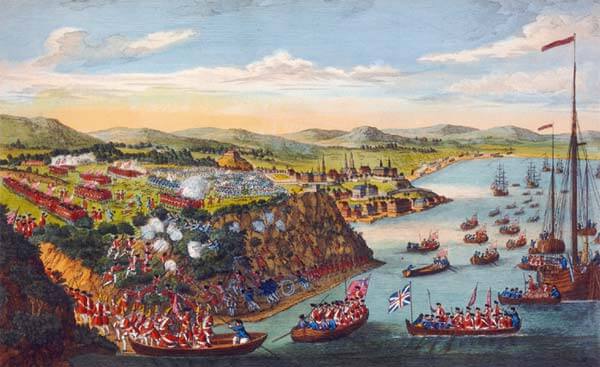 "A View of the Taking of Quebec, 13 September 1759" an engraving by Laurie and Whittle. Image courtesy National Archives.

I feel like I’ve been re-reading the same article all week. Politicians quoted in The Globe and Mail, National Post and others talk about this weekend’s Le Moulin à Paroles like it’s the last nail in Confederation’s coffin.

“There was the death of a man. These were tragic events,” Intergovernmental Affairs Minister, Josée Verner told the Globe when explaining why a public reading of the Front de libération du Québec’s 1970 manifesto is inappropriate.

Most of the articles focused on the pros and cons of reading the manifesto. The “pro” camp says it’s a chance to finally see it for what it really is, almost 40 years later: out-dated Marxist drivel. The “cons” see it as an affirmation of the separatist message and violence.

This debate isn’t really about separatists versus Canadians. This is about the right a group of festival organizers has to choose the material they feel best exemplifies the spirit of Quebec in the 250 years since the Plains of Abraham. Simply put, this is about free speech.

Despite what you’ve read, it’s not the only reading at the weekend-long spoken word event. It features 100 speakers reading recipes, novels, theatre pieces, poems, songs, a botany text and two other manifestos: those of Louis Riel and Louis-Joseph Papineau.

Riel sentenced Thomas Scott to death in 1869, for showing a disrespect to his provisional government, which would later become Manitoba. Disrespect wasn’t a capital offense under Riel’s government, but he felt it the only way to send a strong message to Canada.

Papineau lead the Lower Canadian Rebellions of 1837 against British rule in Quebec. Papineau and his Parti Patriotes wanted to keep French revenues out of the pockets of British politicians and to gain greater control of civil affairs in Quebec. A Montreal subway stop, several parks, and a federal election riding bear his name. His home is a national historic site.

The major difference between the FLQ manifesto and those of Riel and Papineau is that the latter are so far in the past that they are little more than dusty facts to most of us. 1970 is not so far removed from our collective memory. To my mother’s generation, the events of October 1970 are real memories, just as my generation will remember September 2001. To Quebecers, these memories are made all the more real by their proximity.

The FLQ bombings and the death of Pierre Laporte are part of a dark time in Canadian history. Reading the manifesto may offend some, but it’s a part of our history nonetheless.