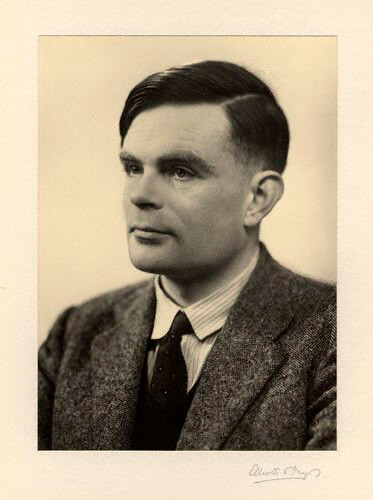 Alan Turing, pioneer of the digital computer, codebreaking war hero, and godfather of geeks everywhere, got a posthumous apology yesterday — many years overdue — from the British government. Prime Minister Gordon Brown issued a statement acknowledging the government’s “appalling” treatment of Turing when it tried and convicted him of “gross indecency” based on his sexuality, and sentenced him to chemical castration in 1952.

The apology came after more than 30,000 Britons signed an online petition asking the government to apologize for this injustice.

The statement reads, in part:

Turing was a quite brilliant mathematician, most famous for his work on breaking the German Enigma codes. It is no exaggeration to say that, without his outstanding contribution, the history of World War Two could well have been very different. He truly was one of those individuals we can point to whose unique contribution helped to turn the tide of war. The debt of gratitude he is owed makes it all the more horrifying, therefore, that he was treated so inhumanely. In 1952, he was convicted of ‘gross indecency’ – in effect, tried for being gay. His sentence – and he was faced with the miserable choice of this or prison – was chemical castration by a series of injections of female hormones. He took his own life just two years later.

Thousands of people have come together to demand justice for Alan Turing and recognition of the appalling way he was treated. While Turing was dealt with under the law of the time and we can’t put the clock back, his treatment was of course utterly unfair and I am pleased to have the chance to say how deeply sorry I and we all are for what happened to him. […]

So on behalf of the British government, and all those who live freely thanks to Alan’s work I am very proud to say: we’re sorry, you deserved so much better.