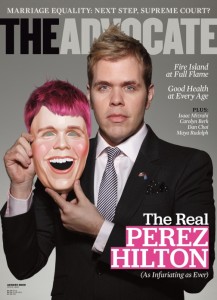 Perez Hilton on the cover of The Advocate.

Gay men must be suffering an image crisis this summer. First the spandex disaster that was Brüno assaulted our movie theatres, now Perez Hilton is on the front cover of The Advocate. How embarrassing.

I haven’t seen Brüno, because I’m trying to pretend it doesn’t exist—an attitude which seems to have caught on, judging by the film’s box office nosedive. Perez Hilton, however, just refuses to disappear.

For those of you blessed with selective memory, Hilton made a minor splash at this year’s MuchMusic Awards after getting punched in the face by the Black Eyed Peas’ manager—it turned out, because Hilton called the manager “a faggot.” Add this incident to Hilton’s habit of drawing semen and penises on the faces of male celebrities pictured on his blog, and he’s made a career out of being a 12-year-old boy.

Hilton is not just incidentally homophobic—I think it’s part of his success. Readers feel more comfortable reading “the Queen of all media” if he’s openly homophobic, and for some reason it’s socially acceptable to laugh at the word “faggot” when it’s used by one.

And yet The Advocate is crediting this man for “putting marriage equality center stage,” because of a stunt he pulled at Miss USA. If you ask me, Proposition 8 has done more to raise the profile of marriage equality than Perez Hilton in the last year: Hilton is just trying to steal the spotlight.

Who The Advocate puts on its cover matters, because the magazine is the voice of the gay establishment. It has no equivalent in terms of age or influence, and it speaks to a generation of (mostly male) gays who have graduated from the margins to ocean-front property. One of its staff writers was recently invited to the White House for the signing of a bill extending domestic partnership benefits to federal workers, and the Huffington Post relies exclusively upon advocate.com for its “gay” news. So putting Hilton on the cover along with a profile that paints him as a hard-working kid who’s too shy to hit on cute boys at parties loudly confers on him the approval of gay people in America.

Well, this gay person in Canada is pissed, and I’m not alone. GLAAD publicly denounced Hilton for screaming “faggot” after the Toronto incident, and when Hilton pledged to donate the proceeds from his law suit against the Black Eyed Peas to anti-hate campaigners The Matthew Shepard Foundation, the organization said they didn’t want it.

Perez Hilton does not represent me, just because alongside being mouthy and obnoxious he happens to be into dudes. And the very last thing the movement for marriage equality needs is a self-loathing bully as its spokesperson.

Cate Simpson is a freelance journalist and reviews and web editor for Shameless magazine. She lives in Toronto.