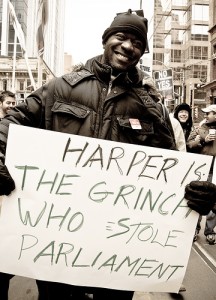 When Harper prorogued parliament in the closing days of 2009, Canadians took to the streets. Creative Commons photo by Fifth Business.

Britain’s five days of post-election limbo are over as David Cameron, Conservative Party leader and now Prime Minister, announced Britain’s first peacetime coalition government since the 1930s.  Ushering in an era of cross-bench unity, Cameron’s Conservatives will join forces with Nick Clegg’s Liberal Democratic Party.  Cameron has appointed six Liberal Democrats to the cabinet, including Clegg as his Deputy Prime Minister.  In a press conference held today, Cameron said: “We are not just announcing a new government and new ministers. We are announcing a new politics. A new politics where the national interest is more important than party interest, where co-operation wins out over confrontation, where compromise, give and take, reasonable, civilized, grown-up behaviour is not a sign of weakness but a sign of strength.”  Clegg added, “Until today, we have been rivals: now we are colleagues. That says a lot about the scale of the new politics which is now beginning to unfold.”

If reading this makes you wonder, as I did, what it would take to see a similar spirit of cooperation sweep Canada’s house of commons, it’s for a good reason. Canadian minority governments—i.e., the last three consecutive ones—are strangely reluctant to form coalitions. Instead of creating solid coalition governments in which the parties are forced to negotiate—in Cameron’s words, creating “a shared agenda and a shared resolve”—Canadian parties tend only to reach across the aisle on a case-by-case basis, leading to constant brinksmanship and partisan sniping.

The exception, of course, came just six weeks after the 2008 elections when an attempted coalition between Liberals and New Democrats, with support from the Bloc Quebecois, would have ousted Stephen Harper’s conservative minority government from power, creating a majority coalition on the Hill. Harper, in response, prorogued parliament to allow the Liberal Party to consume itself with infighting and ultimately scuttle the coalition.

While Canadian politics has been defined by six years of minority government—six years during which the NDP has not meaningfully advanced the cause of proportional representation, by the way—British politicians have realized the power of broad support, and look set to overhaul their electoral system, too. It’s enough to give a Canadian a serious case of coalition envy.