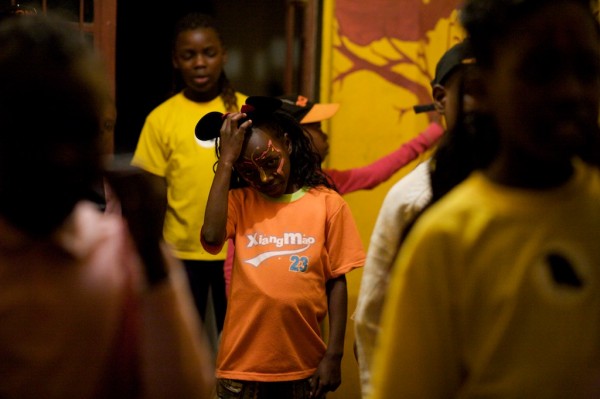 Brenda, one of the orphaned children at the CYCA Center for Orphaned Children. Photo credit: TMS Ruge (tmsruge.com).

International development and foreign aid is a complicated and contentious field. A thousand different components—such as water, sanitation, food security, child care, education, infrastructure—need to be addressed simultaneously. The targeted community must be the leader of all changes. Financing must come from a sustainable source, such as partial subsidization by the community itself, to ensure a sense of “ownership.” Hand-outs lead to laziness and a lack of responsibility.

The traditional model of development, the one I first became familiar with in 2007, is no longer applicable. There is no room for “imposed” development. While a one-week orientation might be enough to put a thin mask over “imposition,” if the community is not at the root of the development process then the project will inevitably fail as donors leave.

While the “imposition” model is less and less common, it is still hard to find “home-grown” development projects. Many are crowded out by mainstream development networks with larger budgets. Others have not harnessed the Internet to communicate with the media and the public. In many regions in Eastern Africa, civil society is limited and local non-governmental organizations uncommon.

Because of these circumstances, when I come across a project like the CYCA Center for Orphaned Children, I find its accomplishments remarkable. Founded by Armstrong Ongera, a philosophy graduate from the University of Nairobi and Founder/President of the Armstrong International Development Network (AIDN), the orphanage is a sustainable development model based on local funding. It is developed by Kenyans, for Kenyans.

While the local volunteering ethos is only just starting to make an impact in Eastern Africa, Ongera has harnessed the talents of friends and family, as well as the Diaspora, and ensured their contribution to a variety of projects—from the orphanage to banana growing in Kisii, South-Western Kenya. Members, both in Kenya and in the Diaspora, contribute $20 a month.

Ongera moved to Nairobi, the country’s capital, as he started high school. He settled in one of the city’s many slums, living with his brother and later by himself. He describes slum life as a “culture” unto itself, offering a variety of experiences and a tight, impermeable community. While he mentions the many problems that come with extreme poverty—rape and domestic abuse, among others—he speaks fondly of the mentality slum-life engendered: a sense of community and togetherness.

This mentality was eventually translated into the orphanage located in Ongata Rongai, a community on the borders of Nairobi. Founded in 2007, the center takes care of 22 children between the ages of 5 and 14.

The orphanage is not about getting children off the street to only see them return as adults. Ongera aims to ensure that they leave as independent and successful young adults with the resources to achieve the dreams they have now.

The orphanage’s main room is covered in paintings and pictures, sign that the children are given the opportunity to explore and use their imagination. We sit in circles singing songs and they proudly show me their art creations. While sleeping quarters are tight, there is a large playground outside. For dinner, they sit at a long table and eat healthy portions of ugali (protein filled maize) and sukuma (green vegetables). Many still wear face paint from the afternoon’s field trip.

Most children are sourced from a local slum where they were left with extended family or the community, neither which could not care for them adequately. Some lost their parents to HIV/AIDS, others to the 2008 post-election violence. Some have family who come to visit on Sunday, but Ongera says he rarely see anyone.

Inspired by his own upbringing and his unique position to help these children, Ongera has teamed up with other Kenyans and stepped in to help. While they may not have a traditional family, these children have found a new home in the orphanage, one which offers the stability of field trips, regular schooling, healthy food, close friends and adopted parents.

AIDN is looking for Kenyan Diaspora members to help contribute to the program, primarily in terms of mentorship. Please contact AIDN via Project Diaspora.