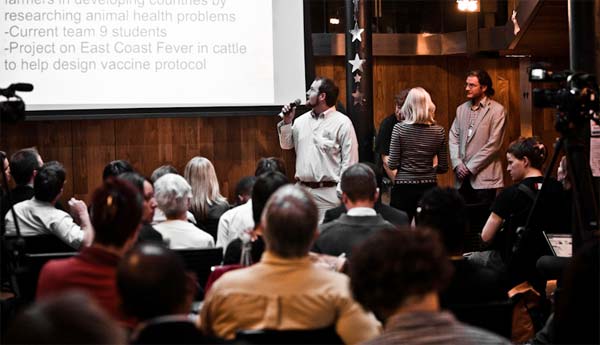 Participants in the "Africa Gathering" conference in London, October 27, 2009. CC-licensed photo via Flickr by chiefmoamba.

In the interest of full disclosure, I currently work with Project Diaspora and am getting hitched to one of the founders next year in Uganda (you might be invited). However, that said, I think myself (mostly) capable of distinguishing between these personal associations and PD’s mandate.

When I first joined PD in 2008, I was vaguely interested in their work. I thought the core idea of the project was different from the mainstream, and therefore merited some attention.

However, when TMS Ruge spoke at Africa Gathering a few weeks ago in London, the reason for initiatives like PD truly became tangible.

While working with the Aga Khan Foundation has been interesting, I often feel that my work is superfluous and could be done much better by someone with a cultural familiarity and connection to East Africa.

I also feel that we foreigners continue the colonialist vibe first exported by the British to Kenya. And, as my father, a former diplomat, points out, the days of colonialism have neatly blended into the proxy Cold Wars fought in African countries like the Democratic Republic of the Congo. Now, international development and aid have become, in large part, a cover for forcing poor and unstable countries into adapting the norms and ideals of other nations so that the West can export their products and ensure their own long-term financial health.

Despite these very real moral obstacles, international development — in the sense of cross-cultural integration, stemming poverty and establishing global economic stability (but not necessarily growth) — remains an important component of African advancement. In a sense, the funds and quality of work necessary to jump-start countries is often still found in the West. Therefore, despite all the subversion that aid delivers, it is necessary to build a connection between these two regions, the minority and majority worlds.

But, how about a different connection? PD seems to offer a unique solution to these two difficulties: development should be home grown with the necessary cultural, linguistic and religious nuances to be successful. At the same time, Western resources are often necessary to start-up projects (even PD, strictly averse to aid, understands this).

PD envisions harnessing the knowledge and financial resources (including $40 billion annually in remittances) of the African Diaspora, mostly living in the West, in the interest of social and economic development in Africa.

This means encouraging members of the African Diaspora to contribute to the advancement of their countries; either by coming back and directly contributing their skills; or by acting as advisors to government, non-governmental organizations and the private sector. PD hopes, in a sense, to reverse the “brain-drain” that has been overwhelmingly crippling the African continent.

Instead of imported World Bank employees at $100,000+ tax free per year, such international organizations can focus and draw upon an influential African Diaspora working in the West and start re-building these broken links.

In the long-run, this could bolster the faltering middle class of countries like Uganda and allow a stronger political voice among the people. By ensuring a cultural continuity in development, one also has the opportunity to lift people out of “victimhood” and bring the role-models home.

However, this is only a first step. The idea of re-branding Africa must be included. In practice, this concept would allow for the awakening of a new market built on the talent of Africans, Diaspora and non-Diaspora. As explained in TMS’ speech, customer service is key to the development of countries like Uganda. I don’t mean in the traditional sense — even though Teddy refers to it — as exporting computer troubleshooting labor from the US to Uganda.

Instead, I think he (and many other Ugandans/Africans) mean that businesses in places like Uganda need to step up to the plate and produce the products and service currently delivered both in the West and new economic superpowers like China and India. Simultaneously, we need to use the individuals behind these businesses as proof that African countries are not defined simply by corruption, instability, poverty and war. This involves both bringing these individuals to international light and helping the West understand that there is an investment to be made, while ensuring that African countries deliver on the work that is desired.

Lastly, while globalization has its merits, I think Africa can do it differently — and better. With all the “big” lessons being learned by countries like China (pollution) and the US (dependency on oil), African countries have the opportunity to posit a ‘healthier’ form of economic and social development.