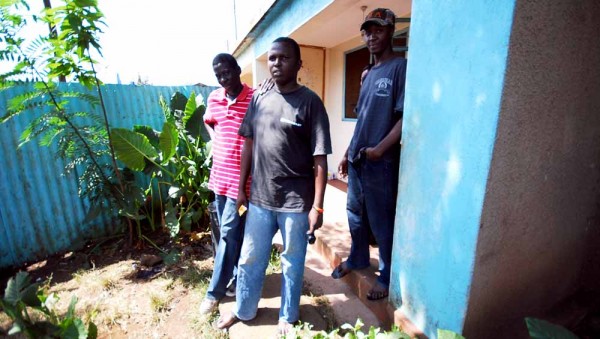 The Obunga Youth Group sits on the edge of the biggest slums in Kisumu, the main city in the Nyanza Province of Western Kenya, and the epicentre of post-election violence. This week they held a forum and how to move beyond that horrific episode. With 12,000 people living on less than $1 a day, the slum is not only a humanitarian disaster, but was also a breeding ground for the dissatisfied rioters who looted Kisumu in 2008.

The youth group’s compound is comfortable, despite the poverty it originates in. In the sun-sheltered meeting room, William Odenge, founder of another youth group, Kenyan Youths for Positive Development, initiates the discussion. Largely informal, we are about 15 people, all men save myself, sitting on white plastic chairs. The youth group members, between 14 and 25, all live in the Obunga slums; most participated in the Kisumu riots which destroyed and looted the property of many of the wealthier Hindu and Kikuyu businesses.
During the post-election violence in Kenya in 2008, international media was quick to highlight the “ethnic” differences that sparked these riots. Kenya quickly carved itself into communities along the lines of Kikuyu, Luo, Kalenjin—so-called “ethnic groups.” The barbarism of the Rwandan genocide was brought back to life.
However, It is clear that their opinion of the post-election violence is different from what many people, divorced from their poverty, have assumed.

Steve, a student from the University of Nairobi who was born in Obunga, is quick to point out the economic roots of violence. “The election was about class, the divide between rich and poor,” he explains. The Hindus and Kikuyus in the region seem to have acquired much greater wealth than the Luo, who are the major ethnic group in Western Kenya. It is not that ethnicity is a dividing factor in Kenya—all in the room agree that they are aiming for a united Kenya, without ethnic divisions—but these ethnic groups form social networks based on trust and family which eventually acquire greater wealth than others, in one form or another.

The riots were an opportunity to protest perceived injustices against the poor, both by government and by the wealthy, in Kisimu. As Mwai Kibaki claimed the elections, the community mourned the loss of a President from their region—Raila Odinga—and resorted to rioting to “release frustration,” but also to protest the government. Television broadcasts showing the wreckage in Kibera, Nairobi’s largest slum, further incited an uprising.

Even now, a year after the post-election violence, the air is heavy with criticism and comment. Recently, the Kenyan government opted for a Truth, Justice and Reconciliation Commission (TJCR) to deal with the post-election violence. While there is some merit to this approach in that it might foster some necessary dialogue, 68% of Kenyans favour trying offenders at the International Criminal Court.

Members of the Obunga Youth Group have a clear understanding of national politics. Emmanuel sees the ICC as a neutral ground in which government leaders—the big wigs of the post-election violence—will be impartially tried. Without this neutral ground, he suspects the outcome of the commission to be a further dividing factor as communities claim that indicted members were favored or punished by the government.

Others favour a local tribunal which would be partially overseen by the ICC. These young men voice hope that Kenya will use the opportunity “to learn from the violence” and alter their constitution to ensure that the President is not beyond the rule of law. They hope that a local tribunal will increase Kenya’s capacity to deal with its own problems. They also hope it will spur reform within the government.

While they highlight the merits of face-to-face dialogue brought by the TJCR, most believe that this option will allow the government to duck out of the mess they created and continue a regime of corruption and misinformation. Fred points out that previous “commissions,” such as that appointed to deal with the Anglo Leasing scandal, were largely useless as they failed to incorporate the public in the process and ultimately became a dead end.

These youth want to see a change in their community, and they would rather adopt non-violent methods to achieve it. Fred believes that “youth must articulate new leadership” and ensure a diversity of political candidates in the future. There is no doubt about their own ability to understand the political situation they find themselves in and the way they would like to see it develop.

Yet, despite the enthusiasm and drive to develop a connected Kenya, there remains the divide between government and local communities. “We must reach a point where we are proud to be Kenyans,” says Fred.