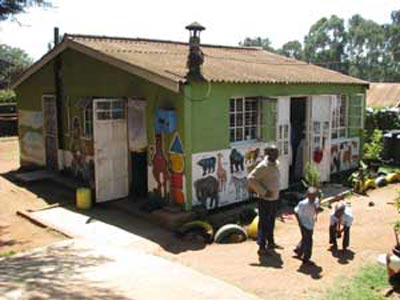 The Greenhouse Preschool in the Kibera slum, Nairobi, Kenya. The school aims to improve the quality of life for disabled children in the neighbourhood. Photo courtesy Deaf Aid

Patrick teaches at the Greenhouse Pre-School in Kibera. Tucked into a sunny courtyard, the school is not typically representative of Kibera, the largest slum in the world and often used to represent Kenya’s “darker” side.

The 25 students Patrick teaches are deaf. While they might be silenced to the busy noise of the surrounding city, as I enter the school grounds, one can immediately tell their determination and curiosity through a flurry of questions articulated in sign language.

The school, founded by Deaf Aid, a Norwegian-funded non-governmental organization working with deaf children in the country, was opened in 2006. What appears to be the only institution like this in the region, Greenhouse takes in deaf children of all ages and backgrounds and help them work through all standard kindergarten material, including English, kiSwahili, math and sign language.

In Kenya, special needs children are often seen as ‘bad omens.’ Children are sometimes left locked up their houses, ostracized from the world around them. A 2007 report claims that approximately three million people with disabilities, which includes deaf individuals, in Kenya are also having their rights violated through limited access to employment, wage inequity, sexual harassment and theft.

Shiro Muiruri, who works in early childhood education/development, tells the story of one little girl who was locked in her house day after day as her parents left for work. The neighbor would come over and rape the child. The girl, unable to communicate with her parents, was left in this desperate situation for years. Eventually, she was introduced to Deaf Aid. She has now learned sign language and can express what she went through.

The school focuses on early childhood education. This type of “pre-school” education we might take for granted in Canada is key to the proper development of the child and his or hers success in primary school. Up until now, there existed few options for parents who wanted to prepare their deaf children for future education, particularly for families living in poor areas like Kibera. The Greenhouse program, which hopes to provide primary and secondary schooling in another region, Kisii, is filling this gap.

Deaf Aid pays for most of the costs of the 300 children under its care. A portion of these children, the 25 at Greenhouse, pay nothing at all and are given pre-school training while the others are sponsored in primary and secondary schools, both integrated and for deaf children only, around the country. These “integrated” schools are generally government owned and operate alongside “mainstream” education by providing special needs students with extra attention while ensuring they remain a part of the regular system.

In order to reach out to the parents of deaf children, and ensure that the mentality of deaf children as “useless” is eradicated, Deaf Aid also teaches parents sign language every Saturday afternoon. As many of these parents come from very poor backgrounds, Deaf Aid also offers lunch money and bus fare to the Greenhouse parents – primarily from the Kibera, Kawangware and Mukuru slums – to learn new “life skills” such as tailoring, hairdressing and knitting. During the holidays, the school hosts open classes which bring together deaf children and their hearing siblings. By November, Deaf Aid also hope to host a mobile “hearing clinic” to target Kibera and rural areas outside Nairobi. This will help ensure that diseases causing deafness are caught early and that deaf children are given the necessary treatment.

Despite these projects, the situation for specials needs children in general in Kenya continues to look bleak. According to the Ministry of Education Science and Technology in Kenya, in 2004 there were 750,000 special needs children at primary school going age with only 26,000 enrolled. The government has reaffirmed its objective to help integrate special needs education and OVCs into the mainstream educational system through its “Education for All” initiative launched in 2003. However, these children continue to remain marginalized.

There are many barriers to integrating special needs education. One notable challenge is cost. An article from IPS News highlights that: “The cost of educating a child in a private institution that caters for special needs ranges from about 192 to 641 dollars per term – a considerable expense in a country where, according to the United Nations Human Development Report for 2003, about 23 percent of people live on less than a dollar a day.” As stated in a report for the Commonwealth Education Fund, “low enrolment [of special needs children] has been caused by high costs of providing adequately trained teachers and other support personnel, specialized equipment and instructional materials.”

The Greenhouse pre-school model, as well as its expansion to primary and secondary school classes, offers both good and bad. While the cost of enrolling children in the school is high, Deaf Aid promises to cover most of the children’s costs. However, it also makes for a potentially unsustainable model that is not fully government-supported and therefore more difficult to mainstream in the long run. Second of all, while schools like Greenhouse offer targeted, high quality education to deaf children – and in the long run ensure that their disability turns into an ability – they also separate these children from the “mainstream,” which could reinforce existing stereotypes.

Yet, Patrick’s story — of growing up deaf in Kenya and of now being married with children — is admittedly rare, but perhaps will increase as Deaf Aid expands its services from a pre-school to a secondary: The latter is planned to open soon in Isinya in Rift Valley Province.