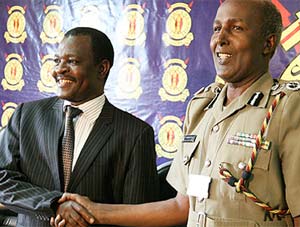 One evening in December, during the post-election violence in Kisumu, Western Kenya, Dennis Otieno was walking down Tom Mboya Street with four other friends. Once a busy thoroughfare, he was now walking past empty stores with their windows smashed in and their goods looted.

Suddenly, a police car pulled up and two policemen spilled out and started shooting at the group of friends who were not armed or rioting. In a panic, Otieno ran. When he returned, he found his 17-year-old friend on the ground, his intestines spilling out onto the sidewalk. They tied him into a make-shift burlap sack carrier and brought him to the hospital.

When Otieno eventually confronted the guilty policemen, they refused to comment. In fact, his friend was one victim among many: out of the 50 killed during the riots in Kisumu, the police had allegedly shot 30. Three were under the age of 14 years and three, including a 10-year-old girl, were female.

As far as the Kenya Police goes, this is just a drop in the bucket. According to the Oscar Foundation Free Legal Aid Clinic-Kenya, over 8,000 people have already been killed in sect crackdowns. In 2001, 90 percent of people killed died at the hand’s of the police force. And, in more minor (though expensive) incidences, it is common to pay policemen bribes to get through road blocks and out of unfair arrests.

Such murder and mayhem within the police force has not gone unnoticed. Police reforms are apparently underway. Last week, Raila Odinga, Kenya’s Prime Minister, vowed that reforms would be initiated throughout September.

The reforms signal a changing of the guard in the Kenyan police force by Officers who have not already tarnished the force’s image. They would be given the necessary counseling, tools and paychecks to survive comfortably. With the sacking of the country’s police commissioner on Tuesday, it might also mean the removal of the force’s other top leaders, undoubtedly Mwai Kibaki’s, Kenya’s President, Kikuyu cronies.

William Odenge, leader of the Kenyan Youths for Positive Development youth group, highlights ethnicity and salary as two key issues behind the current situation. While I try to stay away from labeling any problem “ethnic” (blame it on my Canadian background or the slew of bad reporting that came out of Rwanda), the longer I stay in Kenya, the more I realize that this truly is a problem.

A traditional political tactic is to ensure that, as President, you have the full support of the police force and military. In the light of this, recruits to the Kenyan police force have been disproportionately in favor of Kikuyu, Kibaki’s tribe. And, once you send Kikuyu into a primarily Luo region during a time when politicians are paying and encouraging people to kill members of other ethnic groups, violence is expected. On top of that, there has been enough general “Othering” and stereotyping of ethnic groups in Kenya since independence for policemen to feel slightly desensitized to their Kenyan brothers of a different “descent” and find shooting a lot easier.

Another issue is corruption. Why would a policeman bother asking for $12 to let me through a roadblock instead of dragging me off to prison for the evening? On top of making his job a bit easier, he gets to feed his family. There is also the trickle effect: if the big guy at the top asks for bribes, it is almost expected that everyone beneath him would have the same right to ask a similar “favor” or “chai” from the next one down in the hierarchy (the Kenyan people being the cushy bottom rung).

While the government appears to take these police reforms seriously — and who knows, they might happen and be effective — long-term peace and stability still comes down to changes in government. Kenya is a country where the top political leaders are revered by the Kenyan people despite the wrong they continue to cause. Kenyans understand how government works; they know what the politicians are doing wrong; the newspapers recount, step by step, what Parliament is up to. Yet, intimidated by the sheer power and inflexibility of their leaders, government reforms are never prompted.

Key to changing the whole dynamic of the country is changing leaders. Finding leaders who are simply willing to accept what people want without buying their votes. Key to making sure this happens is showing leaders that inciting violence, bribing voters and encouraging a murderous police force has a price tag: the International Criminal Court (ICC).

As Otieno says, “police is a business and nothing will happen with the reforms unless international friends come in and intervene.” As part of the greater picture of post-election violence justice, a majority of Kenyans have voted in favor of this mechanism. However, as the government swears in the leading members of the Truth, Justice and Reconciliation Commission, the current justice mechanism preferred by a scared government, it looks like international pressure will be key in ensuring a better Kenya.