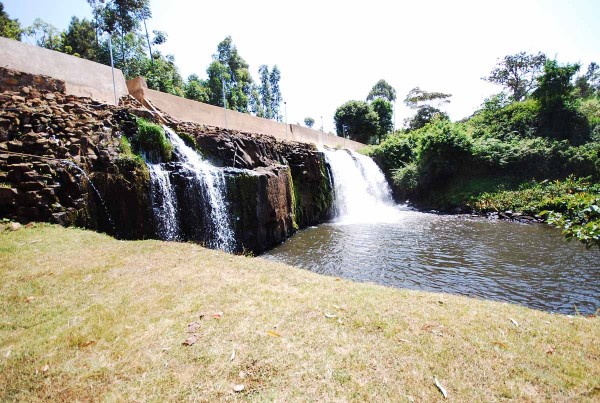 The volunteer-built dam in Kianyaga, Kenya. Electricity-generating turbines will be installed soon. Photo by Siena Anstis.

The idea of supplying hydro power to poor communities came to Nyaga Ndiga after hours spent by the river grinding millet. He was inspired to try the same concept—friction—to produce energy. In a country where only 4 per cent of the population can afford electricity, Ndiga was uncovering an untapped market: cheap, sustainable, community-owned rural electricity.

At first, Ndiga went door-to-door, generating support and interest in his idea. While there were no other power sources in the village, he still had to gain the respect of the community—a hierarchy hard to tackle—or his project was a sure failure. During this time, he met Robert Mutsaers, a Dutch industrial designer/philosopher/sociologist/social engineer who found Ndiga by joining a meeting he was holding on the side of the road. Mutsaers had spent many years exploring the region, having first driven down from the Netherlands in 1991, and was interested in seeing how such a project could bring communities together and provide the necessary social network for business to flourish. Their relationship grew over the following two years as they worked together to develop a coherent business plan for GPower Ltd.

Ndiga is very clear that GPower “is not about power, but about change.” For one, the project engenders the concepts of volunteerism and ownership. Beneficiaries donate two days a week to heavy digging and lifting to build the dams themselves. They also help fund the project through weekly 90 cent contributions. The elders who cannot lift heavy objects have teamed up with another local organization to grow a tree nursery to replace all felled flora on the dam’s edge and grow wood for electricity poles.

As the debate around aid and development rages in the popular press—see Dambisa Moyo, Paul Collier, Bill Easterly—here in Kianyaga, a much more sophisticated and home-grown concept of development is emerging. “Electricity is about networking people,” explains Ndiga. Instead of seeing development as poor people benefiting from the help of the rich, the poor and local wealthy farmers have come together to push their own agenda. In development speak, we call this village or community based development. Instead of parachuting in CIDA or UN development ‘specialists,’ communities pool their own resources and make informed decisions about how they wish to live their lives.

This type of development provides an educational platform for men, women and youth alike. For example, GPower ensures weekly meetings that discuss the mundane, but important, details of organizational structure, management, and investment. The goal of this project is sustainability: sustainability in the sense that this project, a culturally viable concept, will fuel initiative among coming generations that will empower (and power) not only Kianyaga, but also the rest of the country.

When Ndiga highlights that power is not the main cause for this project, he digs deep into the social structures of the region. Male headed-households have marginalized women, who, while in charge of the fields, rarely see any income; youth, complacent, are educated in missionary-run schools that continue to charge high prices for sub-standard education. He expresses the need to use the GPower model of community development to start and fund their own local schools and to ensure the inclusion of men, women and youth in all local projects.

In a sense, GPower is fueling a small revolution. Harnessing their own power source, these communities have said no to expensive imports and to the regional power corporation, Kenya Power. They are building the structures to organize as a community and push a communal agenda. An internal funding system ensures the project will remain alive long after international donors have pulled out: 8 per cent of the project is currently being paid for by wealthy local tea and coffee farmers who have bought shares in GPower Ltd. As the turbines start function, individuals will pay an average of $8 a month to access the power source. A one-bulb program mean that poorer households can pay $2 to have access to one light. Combined with future share sales, the dam will have access to a steady source of funding for maintenance and expansion.

When seen in this light, the uncomfortable feeling that development is simply a form of neo-colonialism vanishes. Instead, one see that these projects are very similar to community initiatives in the “developed world:” there is a need, which the government or another body isn’t meeting, and people come together to satisfy this need. It’s an entirely natural process – regularly hampered by foreign aid and development with little local knowledge – that build the necessary “social networks” for business and peace to thrive.