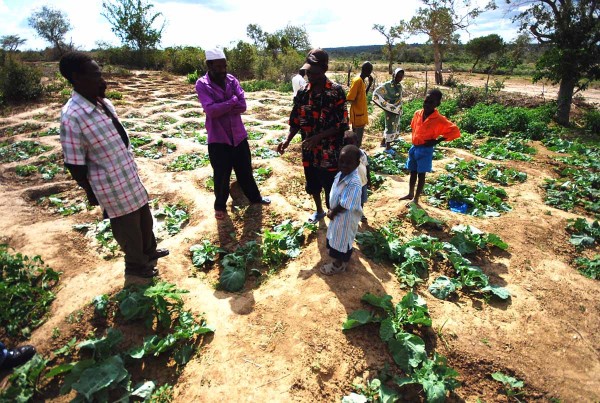 Year-round, Mama Agnes feeds a family of six with a comparatively 100 square-metre plot of land. She stands in her backyard garden, an oasis of green in a landscape left yellow and cracked by the hot sun. She points to tomato plants heavy with still-green fruits, sukuma (kale), onions, and spinach.

Mama Agnes is currently in the middle of her own one-woman green revolution: she is adopting new farming practices learned from the nearby Sukuma Farmer Field School (SFFS) in Chikwakwani, a semi-arid region about 50 km inland from the Kenyan coast.

Trained by the school as a “community resource person,” she has spent many weeks practicing new farming techniques in water conservation to then implement at home. She learned how to dig three-foot-deep square pits. She was then taught to layer the bottom of the pit with cut dry grass and cover this with a mix of topsoil and home-made manure.

While a simple modification of local farming practices, it has had a drastic effect. Suddenly, plots only need to be watered once a week, instead of every day, both morning and night. The grass absorbs the water, slowly releasing it over the week as the plants become thirstier. Plots of healthy tomato and kale at the farm school and in Mama Agnes’ garden attest to this miracle.
Since many of the region’s backyard farmers have to walk 40 km to fetch water, this has been the barrier to growing bigger gardens. Mama Agnes, as an ambassador for SFFS, has spread this water-saving practice in her local community. Villagers, who no longer have to buy supplementary food, find themselves a small degree wealthier with enough savings to buy soap and salt.

Founded in the early 1990s, SFFS has helped reform local practices to adapt to a worsening environment. The school, supported by a local non-governmental organization called the Coastal Rural Support Program (CRSP), now boasts 60 members. Based on a “learn by doing” pedagogy and set in a “school without walls,” farmers learn, hands-on, how to change their yields.

While these new practices have made a significant difference, there remains one eternal problem: water. No matter what types of conservation approaches are adopted, there remains a shortage. The school’s dam, afflicted by sedimentation and seepage, is almost empty. How these farmers will survive, as climate change makes semi-arid regions like Chikwakwani into inhabitable landscapes, is anyone’s guess.

In fact, it looks like most will become “climate refugees.” The United Nations University’s Institute for Environment and Human Security estimates that by 2010 there will be an estimated 50 million such displaced persons. Since these individuals are not protected under international law, even though environmental and social issues are closely connected (for example, in Darfur, desertification has partially fueled the conflict), they are at the mercy of governments who often have little interest in countering this fatal trend.

But, on that damning note, there do exist some inspirational leaders who are interested in reversing—or attempting to reverse—the path we have taken. Here in Kenya, Nobel Prize winner Wangari Maathai founded the Green Belt Movement to encourage tree-planting among subsistence farmers who are forced to raze forests for charcoal to use as cooking fuel and heat.