[Editor’s note: this series of blog posts on the bombings of natural gas wells in Northern B.C. is running over three days; part one was posted on Monday. Part two ran yesterday. This is the final part of the series.] 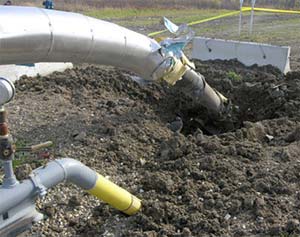 The RCMP’s recent decision to raise the temperature in this region by officially describing the gas well blasts as “terrorism” is unlikely to improve the relationship between the investigators and area residents. “This is not the work of eco-terrorists, for God’s sakes,” Andrew Nikiforuk, the author of the 2002 book, “Saboteurs: Wiebo Ludwig’s War Against Big Oil,” said in a particularly prescient October 2008 interview. “This is the work of a pissed-off landowner who’s probably a property-rights advocate, who doesn’t like the fact that either his health has been damaged, or his property has been devalued by sour-gas developments.” In that same interview, Nikiforuk rejected the idea that the intent of the person(s) behind the bombing was to injure people. “Whoever did this wanted to make the headlines, they didn’t want to kill people. If you want to kill people up there with sour gas, it would be very easy to do. There are thousands and thousands of pipelines, wells, and scores of sour-gas plants up there,” he said. “Whoever did this planned it very well, picked the locations very carefully, and seems to have been either skilfully adept at not rupturing a pipeline, or skilfully inept at not rupturing a pipeline — and I suspect there are signs here of skilful adeptness.” 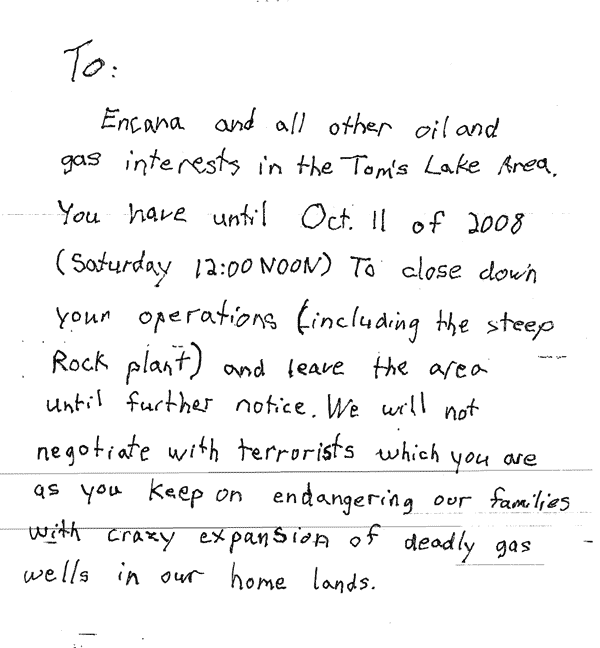 Letter from the bomber that preceded the first blast at an EnCana facility. Courtesy RCMP.

The original letter, above, that preceded the first bombing some nine months ago identified the unregulated and unrestricted growth of the oil and gas industry and its effects on the health and security of local residents as the source of the author’s anger. Blair Lekstrom, the MLA for Peace River South and the Minister of Energy, Mines, and Petroleum Resources, believes that the government has made progress on that front. “We have acted on a number of things,” Lekstrom said in an interview with the Dawson Creek Daily News recently. “The setbacks and the flaring we’re working on right now as I committed to. There have been numerous issues raised that we have moved on in the last six-months, and I’m quite proud of what we have been able to do.” These issues include introducing a code of conduct for the land agents who interact with local homeowners on behalf of the oil and gas companies, the opening of an Oil and Gas Commission in Dawson Creek and Fort Nelson, and the creation of a farmer’s advocate.

For the bomber, though, that doesn’t appear to be enough, judging by the two most recent bombings. In time, whether because of a misstep on the bomber’s part, a tip from the public, or just good old-fashioned detective work, the RCMP will break the case and make an arrest, but that will only be the end of the beginning of this story. The rest of the story will turn on whether local officials continue to insist that the person responsible for the bombings was an isolated lunatic, a dangerous idiot with an unreasonable vendetta against local industry. If they do, another disgruntled individual willing to take the law into his own hands will materialize in time, just as Wiebo Ludwig did a decade earlier. Violence, after all, is a perfectly logical way of expressing political dissent in a part of the country whose culture is informed in equal parts of anti-government prairie populism and stubborn, gun-at-the-hip, can-do northern individualism, and more effective than any facebook petition, political rally, or other form of civilized political disagreement could ever hope to be.

The bigger challenge facing local officials, from Liberal MLA Blair Lekstrom, who conveniently enough is also the Minister of Energy, Mines, and Petroleum Resources, all the way down to the mayors of towns like Dawson Creek, Fort St. John, Pouce Coupe, and even little Tomslake, where this all began nine months ago, is to recognize that the public’s silence throughout this investigation represents a form of protest of its own. Nobody up here wanted to see anyone hurt or injured while doing their job, but neither do they want to have to see their quality of life sacrificed to the development of the gas industry, or live with the long-term consequences of being so close to such a dangerous substance. It’s time for someone to find a middle ground between these two equally toxic alternatives.

Monday: Why no leads? Yesterday: Everyone’s a suspect. Today: Will the bombings change anything?