[Editor’s note: this series of blog posts on the bombings of natural gas wells in Northern B.C. is running over three days; part one was posted yesterday. Look for the conclusion tomorrow morning.] 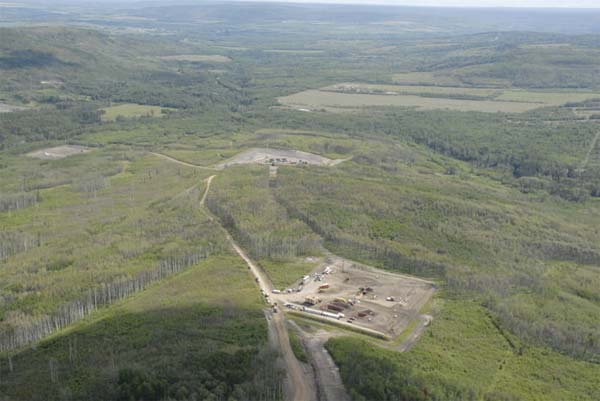 Site of two bombings of EnCana natural gas facilities near Dawson Creek, B.C., one on July 1, 2009, the second on July 4. Police are still seeking a suspect. Photo credit: RCMP.

If the gas that was coming out the ground in Northern B.C.  smelled like rose petals, it might not be such a big deal. The well sites, after all, are relatively small and inconspicuous compared to those required to extract oil from the ground, and it’s not like people up here are short on land. But sour gas doesn’t smell like rose petals, and its effect on the health of those who are unfortunate enough to live near the source of its extraction is no prettier. Sour gas, a form of natural gas that contains significant amounts of hydrogen sulfide, is unpopular among the ranchers, farmers, and other rural residents who are forced to count the well sites as neighbours.

The gas, exposure to which can lead to everything from memory loss, headaches, and dizziness at lower levels to reproductive disorders such as miscarriages, birth defects and even death at higher concentrations, is routinely released into the air by companies that would rather flare it on site—quite literally, burn it off—than transport it to a refinery where the hydrogen sulfide could be removed more safely. While these wells used to be sunk deep into the bush, away from populated areas, the sheer number of them being drilled, combined with the savings associated with using local transport and energy infrastructure, means that the wells are now frequently placed no further than 100 metres away from the property limits of homeowners. Governor General Award winning author Andrew Nikiforuk describes living near a sour gas as being “like having a child molester in your neighbourhood. You never know when it’s going to go off; when there’s going to be a problem. So it introduces to agricultural communities a level of risk and hazard that was never there before.”

Some of these homeowners have fought back, most famously the infamous Wiebo Ludwig, who waged a decade-long war against EnCana that ultimately resulted in convictions on five charges related to bombings, and other forms of vandalism against the company’s installations, that landed him in prison for 28 months. Despite the presence of a local culture that holds personal independence and a facility with firearms in roughly equal esteem, many residents in the Peace are more reticent than Ludwig was to get into a confrontation with the oil and gas companies in the area. In a March 23, 2004 piece published by The Tyee, journalist Shefa Siegel tried, without success, to get residents affected by their proximity to sour gas wells to go on the record. “I don’t know what it’s going to take for people to wake up to what’s happening here,” one local who wished to remain anonymous told him. “We’re even scared to grow a garden because we don’t want to eat food from our land. We don’t have any idea what’s in the soil.” Another, he writes, ”sought me out to discuss burns on their bodies suffered after what they believed was an unpublicized leak at a nearby well. I met a number of other families who claimed their lives are in ruin because of sour wells perched in view of their kitchen windows. I made notes on their health woes, their trouble getting physicians to take them seriously, and their feelings of abandonment. But none of these sources would agree to be identified by name.”

The reason why so many won’t talk is because they know what the penalty associated with doing so looks like. The big companies, Siegel wrote, might offer modest cash settlements in exchange for non-disclosure agreements, but they’re just as likely to engage them in a court battle in which their exceptionally deep pockets give them a nearly insurmountable advantage.

As one frustrated resident told Siegel, “Look, I want to talk to you, but I’ve been shouting about this for five years, and no good has come of it. I can’t afford to pay a lawyer if it comes to that. I just want to sell my land and get my family out of here.”

Local, provincial, and federal politicians aren’t of much help, either, given the fact that the extraction of natural gas is increasingly the only business of consequence in the Peace Region. In 2008-09, the revenues from the sale of oil and gas land rights hit a record $2.4 billion, a figure that was double the previous record of $1.2 set in 2007-08, and four times the $625.7 million the province took in just five years earlier in 2003-04. Despite lagging global commodity markets the natural gas exploration boom doesn’t look like it’s going to stop, with all the big players exploring new plays in the region from Tumbler Ridge in the south up to Fort Nelson. That boom, which has already created 34,000 new jobs since 2001, is welcome in a region that has seen just as many jobs in the forest industry disappear with little hope of them ever returning.

But while the natural gas industry is a big hit in northern communities like Dawson Creek and Fort St. John, at the corporate headquarters in Vancouver, and the government offices in Victoria, the people who have to live in close proximity to the thousands of well sites that pockmark the Peace are less enthusiastic. That disaffection helps to explain why the public in the Peace appears to have elected to sit on their collective hands when it comes to the RCMP’s investigation. In an unintentionally ironic statement, the RCMP announced on January 13th that they were offering a $500,000 for anyone who provided information that led directly to the arrest of those responsible for the bombings, and noted that their investigators “are being thwarted by uncooperative residents in the area who are opposed to sour gas exploration.” Right now, that definition could include just about everybody living within a kilometre of a sour gas well, which is, well, just about everybody.

Yesterday: Why no leads? Today: Everyone’s a suspect. Wednesday: Will the bombings change anything?