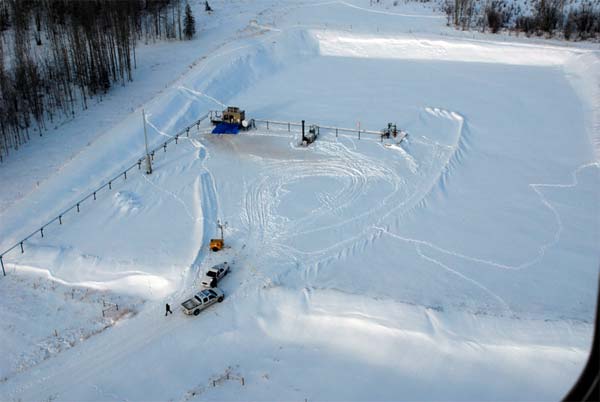 [Editor’s note: this series of blog posts on the bombings of natural gas wells in Northern B.C. will run over three days, starting today. Look for part two on Tuesday morning and the final part on Wednesday.]

When I agreed to take a job as the editor of a small newspaper in Chetwynd, B.C., I didn’t expect to find myself in the middle of an ongoing national story. I learned about the first bombing of an EnCana pipeline as I listened to CBC radio while driving across the country, stuck somewhere between Ignace, Ont., and Theodore, Sask., and I didn’t expect the story to last the two days it would take me to get to Dawson Creek, B.C, the major city closest to where the bombing took place. Yet almost nine months after I arrived in the Peace Region the campaign of bombings continues, while the person(s) responsible for them continue to elude the RCMP. The bomber celebrated Canada Day with a personalized fireworks display, launching another attack on an EnCana installation that was just a few kilometres from Dawson Creek. As RCMP investigators were collecting evidence from that incident, the bomber struck again on the fourth of July.

For those who don’t live up here, this campaign of bombings must be more than a little confusing. How, you must wonder, can the RCMP—with the assistance of INSET, the integrated national security enforcement team—have made so little progress in finding the person or persons responsible for six separate bombings in a pair of communities, Pouce Coupe and Tomslake, that together barely exceed the population of the average Toronto-area high school? Forget looking for a needle in a haystack; for trained law enforcement officers working with $500,000 in reward money, this should be like looking for a needle inside an empty manila envelope.

Yet in more than eight months, during which time the RCMP has moved from chiding the public for their lack of co-operation to virtually begging them for their assistance, they have been unable to produce a suspect. A series of surveillance photographs taken by a security-camera in the Shoppers Drug Mart in Dawson Creek, where the RCMP believes the initial letter threatening EnCana was sent from, yielded nothing. Likewise, the $500,000 reward has failed to lubricate the local tongues that the RCMP believes hold information that’s vital to the case. The locals, it seems, aren’t particularly interested in helping the RCMP catch the person or persons responsible for the bombings.

There’s a good reason for that, and it smells like rotten eggs. While one would be hard pressed to find anybody who would express support for the bomber’s methods on the record, it might be even more difficult to find somebody who doesn’t sympathize with the motives behind his actions. Virtually everyone who owns land in the Peace Region has had to come to terms with a legal technicality that dictates that while they might own the land on which their home, their farm, or their ranch sits, they don’t own the rights to what lies beneath it. In a region rich with oil and gas deposits and an international commodity market increasing desperate for each, that’s a recipe for conflict.

Today: Why no leads? Tomorrow: Everyone’s a suspect. Wednesday: Will the bombings change anything?