A shrewd writer who told the ugly truth about poverty 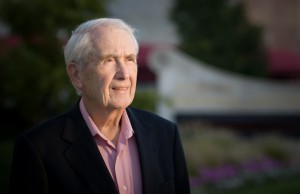 I first read Frank McCourt’s Angela’s Ashes when I was 14. My family took a road trip from Saskatchewan to Ontario — 1,800 kilometres, 20 driving hours, and about 40 pounds of gummy bears. Anyone who has travelled across the country in a minivan with too many bodies and too few roadside stops knows the mortal danger this poses to familial love. Mine was no exception.

While discontent stewed in our stuffy van, I instead buried myself in the tribulations of a desperately poor Catholic family living thousands of miles away in Limerick, Ireland. In the McCourts I felt I had found the enviable foil to my cranky, sweaty, all-too-ordinary family. There could be no more dignified love, I believed, than one resilient in the face of poverty. Here were people with none of the things I had — not snack food (or any food at all, most of the time), terrible 90s cassettes, or the minivan that contained them. And yet they held together, and even managed occasional moments of grace. When Frank watches his brother Malachy walk down the street, his broken shoe flopping off his foot, I thought, “That is the purest love I have ever seen.”

“The happy childhood is hardly worth your while,” McCourt wrote, with characteristic wryness. Yet, as I grow older and re-read passages of Angela’s Ashes — one of three books plus a children’s book that he wrote — my sense of the book’s message has changed. Frank McCourt was too shrewd a writer to suggest that terrible, grinding poverty is noble. The moments of grace are the book’s exception, and the many moments of shame and despair, the rule. To be poor does not create dignity; it erodes it.

When the news came that McCourt had died on Sunday afternoon, I felt the shock and sadness that will be shared by many. It reminds us how remarkable it was that he faced the assaults of a difficult life and still boasted not one but several professions. A teacher, a (Pulitzer Prize-winning) writer and a humanitarian. How many of us can truly call ourselves even one of these?

But for me Frank McCourt remains, above all, one of the few people who had the courage to tell the truth about poverty. Poverty is ugly, malignant to the human spirit, and for far too many, inescapable. “Misery lit” critics call his brand of literature, underscoring the awkward balance such memoirists strike in turning bleak truths into fine art. If beautiful books about the poor are written, it is not because poverty is beautiful. It is because poverty must be shaped in a more appealing, even slightly fictionalized mould, or we would never read the depressing truth.

When I heard that McCourt was ill and not expected to survive I mourned both him and the first novel on which he was reportedly working. He was a rare and much-needed voice. I hope we won’t eulogize a remarkable life at the expense of acknowledging that his childhood was not the kind anyone should have to endure. The greatest tribute we can offer Frank McCourt is to ensure he has no successors.