Professional book reviewing is dead in this country. The CBC could revive it. 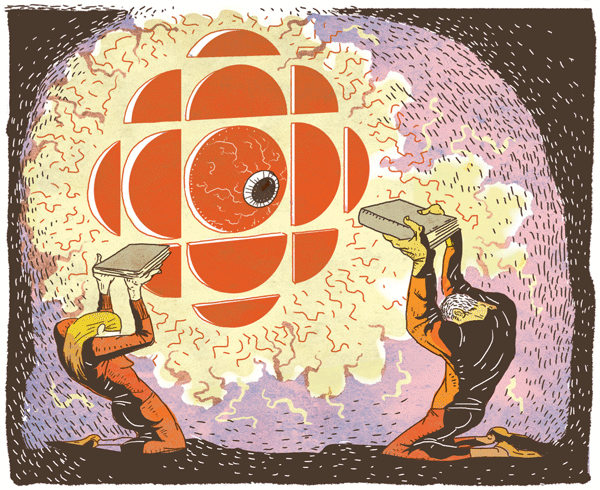 The CBC could be a force for CanLit. Why isn't it? Illustration by Dushan Milic

If Clive Owen were a Canadian author, maybe the CBC would finally review books. Katrina Onstad, a film columnist for CBC.ca, begins a recent review: “The International opens with a long, extended close-up of Clive Owen’s face, following which I jotted in my notebook: Five stars!” As a taxpayer and a citizen who believes in a public arts dialogue, I’m glad that the CBC pays Onstad to write intelligently and entertainingly about Hollywood film. Notably, however, our taxes don’t fund Hollywood film.

Our taxes do fund Canadian literature. Most CanLit gets some level of government subsidy. We pay millions each year to support CanLit through writing and publishing grants, libraries, and literary festivals. That’s a good use of public funds. Unlike our support for the auto industry or Bombardier, we actually get profitable job creation from arts funding. But we subsidize CanLit with one hand and then give the CBC more than a billion dollars a year with the other. Why, why, why does the CBC pay people to review Hollywood films that will cost you $13 to see but refuse to tell you whether the $25-$40 books you subsidize are worth your time and money?

Book reviewing in Canada has never been strong and recently got worse. Last year, several papers, including the Toronto Star, reduced their book coverage by as much as 50 percent. The Globe and Mail’s stand-alone books section ceased to stand alone and was folded into another section of that paper. Last spring, CBC Radio cut the literary debate show Talking Books so Shelagh Rogers could tug her aural smile through some author interviews. Interviews do a good job of showing us which authors interview well. But they don’t tell us what makes novel X better than novel Y. Noah Richler’s book about CanLit, This Is My Country, What’s Yours?, repeatedly mentions that the 2002 Booker Prize shortlist was half-full of Canadians but never once concedes that only two people in Canada—the Toronto Star’s Geoff Pevere and the National Post’s Philip Marchand—make a living reviewing books.

As a nation, as a culture, we have only two salaries devoted to helping us choose where to invest our reading time and money. Two! (Note to bloggers: I said “make a living reviewing books” and “salaries.”)

CanLit has been a big industry since the late ’60s (when government funding created it). That our literature now wins international renown and our private media doesn’t reliably tell us, or the world, what does and does not make for good CanLit is lamentable and, quite simply, immature. That we spend more than a billion dollars a year on the CBC and they don’t review Canadian books is unthinkable.

Oh, wait, right, we’re supposed to think that the annual CBC Radio shouting match Canada Reads counts for book reviewing. After all, it allows Olympic fencers to give sound bites of literary analysis. Each year, a different aging Canadian musician gets a few minutes to champion one book and pooh-pooh four others. Not enough.

The show can be fun and informative. As a judge, comedian Scott Thompson got to say (while speaking of Frances Itani’s Deafening) that describing the contents of a handbag is not literature. Amen. But as a genuine book-reviewing vehicle, the inadequacies of this show versus an Onstad-like book columnist on CBC.ca are many. First and foremost, as radio and a five-sided debate, the format is too unwieldy for a reader who wants to do an informative search about a particular book. Second, we can’t ever forget the show’s Survivor-style elimination gimmick. Lastly, the show is doubly ruined by its (pointless) devotion to celebrity panelists and the flawed CBC celebrity barometer. Former Prime Minister Kim Campbell was a panelist in 2002. If I want advice on how to keep David Milgaard in prison, Kim Campbell’s the source. But for book reviews? Aside from Canada Reads, CBC books coverage consists solely of interviews and reporting, and nowhere tells you what books are good and why.

Dear CBC: give me a reliable, regular and intelligent book reviewer. Not more Randy Bachman.