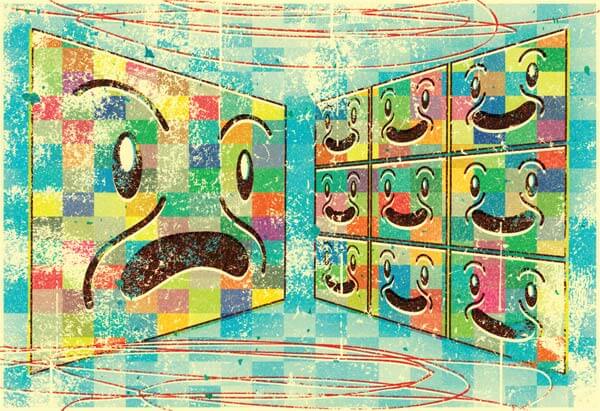 For modern audiences, a pair of earbuds and an ipod qualifies as a home theatre. Illustration by Alexei Vella

The extent of my snobbery has wavered over my years of film-going, but I have always adhered to one fundamental principle. I was trained to believe that seeing movies projected onto a big screen was always the aesthetically correct choice, even if the conditions were less than ideal. I would not be swayed even if I knew that if I watched them at home, I would never be annoyed by fellow patrons with ringing cellphones and screaming babies unless I inexplicably invited them over, nor risk seeing a boom mike dip into a shot because the popcorn jockey trying to work the projection booth had no idea how to get the framing right. As long as the images themselves were big and bright and went largely unmolested, I didn’t mind the variables that came with experiencing movies in public. That’s the trade-off I’ve always accepted.

That belief in the sanctity of the screen image might also make me a relic. I realized that when a film professor told me about a casual poll he recently conducted in an undergrad class. After he asked how many students had gone to see any film in a movie theatre in the last six months (and that selection could’ve just as easily been The Dark Knight as any artier fare), a tiny number of hands went up. When he asked how many had rented a movie to watch at home, there were only a few more hands. Perplexed, the prof asked whether the majority of students had watched anything at all. They explained that they’d seen what they wanted to see after downloading them or watching them streamed from pirate movie sites.

This kind of news has been terrifying the movie business for years now. But while the studios have been marshalling their forces to combat piracy, they may have overlooked a potentially more destructive trend: the cultivation of a new generation of viewers who don’t really care about how good or bad a movie looks. Accustomed to Jackass-calibre production values, low-res YouTube images and iPod screens, they’re already used to watching Hollywood movies the same way. Nor does it seem to matter much that, with their overstuffed frames and ever-more-frenetic editing, the action sequences in most contemporary blockbusters are incomprehensible when presented on anything smaller than an Imax screen.

And if patrons are increasingly indifferent to the quality and clarity of what they’re looking at, then the film industry’s efforts to radically upgrade our viewing experiences for the umpteenth time may prove to be foolhardy. Sales of high-definition Blu-ray players and discs were far below projections even before the consumer crunch hit. Now studios are slashing prices in the hopes that they can get more viewers interested in their premium products, unaware that a pair of earbuds and a netbook with an eight-inch screen now qualifies as a home theatre.

Meanwhile at the multiplexes, digital 3-D technology has become the industry’s great hope. Ever since the animated films Chicken Little and The Polar Express were discovered to have sold far more tickets in their 3-D incarnations than in their conventional versions, there’s been an urgent drive to outfit more theatres with new projectors. Along with the toons — which tend to take much better advantage of the technology than the live action 3-D films do, the most startling example being Henry Selick’s eerie stop-motion wonder Coraline — the expanding list of new 3-D products includes everything from slasher-flick remakes to concert movies featuring Miley Cyrus, the Jonas Brothers, and U2 (not together on the same stage, unfortunately). The true test for the new breed of 3-D movie and its potential to reinvigorate a vulnerable movie business comes in December with the release of Avatar, James Cameron’s first feature since Titanic.

But a breakthrough like that doesn’t come cheap: Avatar’s budget is between US$200 and US$300 million, which doesn’t include the money to outfit new theatres to play it. The same sum could have paid for dozens of new variations of Cloverfield — the monster flick that so cannily appropriated the smallscreen, low-res, and whip-pan-friendly aesthetic adopted and disseminated by its target demographic. Cloverfield is one of the few recent hits to survive the transition to the new context in which more and more viewers experience movies.

Cameron and the film industry are banking on the idea that audiences still want to feel overwhelmed when they see a movie, whether they happen to experience that product in a multiplex or their own living room. But other signs suggest we are losing the capacity — and the desire — to surrender to it like we once did. Degraded and devalued, the screen image may be too meagre to deserve any more of our awe.