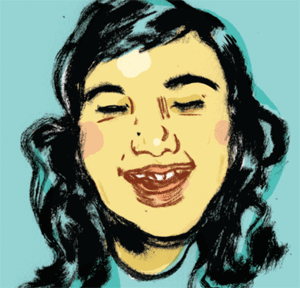 Last year, on October 21, Jillian Tamaki got a phone call from her cousin, the Toronto-based writer-performer Mariko Tamaki. Their muchloved co-creation Skim had made history by becoming the first graphic novel nominated for a Governor General’s Award, in the Children’s Literature (Text) category. Skim, loosely about sexuality, teenage alienation, and Wicca, had already received a torrent of praise and would later make the New York Times Best Illustrated Children’s Books list. Now it was in the running for Canada’s pre-eminent literary prize.

But there was a snag. The Canada Council for the Arts had only nominated Mariko, who wrote the text. Tamaki, whose signature sketchy, half-finished illustrations filled the book’s pages, was not included in the honour. The writer was the author; the illustrator was not. “Obviously, I was extremely disappointed,” Tamaki writes in an email — the Brooklyn-based Calgary expat gently insisted on an online interview because she is “a bit phone shy.” “I suppose it can be argued that one could read the text and look at the illustrations of a children’s book separately, but that’s impossible with a graphic novel.”

A few weeks later, on November 12, genre heavyweights Chester Brown and Seth published an open letter to the Governor General’s Literary Awards, condemning the council’s exclusion of Tamaki and its implicit misunderstanding of how graphic novels work. “The text of a graphic novel cannot be separated from its illustrations because the words and the pictures together are the text,” they wrote. “Try to imagine evaluating Skim if you couldn’t see the drawings.” The council responded that it was too late to change the nomination, and the award eventually went to another work. But the letter — co-signed by a cadre of comics luminaries — quietly marked a touchstone in the uneven cultural ascent of the graphic novel. 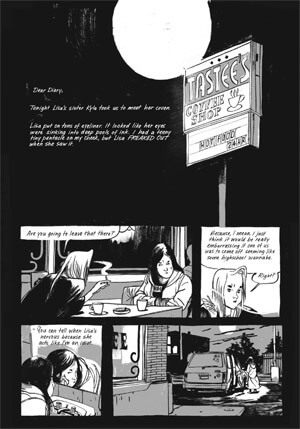 Page from Skim by Jillian and Mariko Tamaki. Click to enlarge

“In a tiny way, I believe the letter nudged the comics community and the book community together, at least in Canada and albeit briefly,” Tamaki says. “It’s not often they have a dialogue. For about a week, we were talking about the nature of storytelling in this medium, which is unfamiliar to new readers.” Graphic novels have proven lucrative as blockbuster film adaptations, though literary approval remains more elusive. “But the book world is obviously making some big statements by nominating graphic novels in its more traditional categories,” Tamaki adds. “It says a lot, since I believe that some still probably believe that comics will never be ‘legitimate’ literature.”

It isn’t surprising that a medium marked by egalitarianism between art and text might turn off the word-focused lit world. “We forget that as ‘comics people’ sometimes: there is a large segment of readers who are picking up their first graphic novel and learning how to read them and judge them,” Tamaki says. Brown and Seth are right that it is impossible to imagine Skim without Tamaki’s drawings. One crucial moment is entirely wordless; the eponymous narrator kisses her adult teacher in a tangle of woods, the school faintly visible in the background. This illustration takes up a full two-page spread.

Despite Skim‘s success, Tamaki still considers herself a “comics newcomer.” She is an editorial illustrator by trade, whose list of clients includes the New York Times and the Guardian, as well as Canadian outlets like the CBC and The Walrus. “Illustrators are interpreters of others’ ideas, and I enjoy that challenge,” Tamaki says. “But oftentimes there is not a lot of yourself in illustration work.” Tamaki, though, is everywhere in Skim, in every pained adolescent expression and looming empty space. Her contribution escaped the Canada Council for the Arts, unaccustomed as it was to a foreign format. But her presence stays with the reader.