The web allows immigrants to straddle two worlds like never before

As in so many immigrant families, weekend mornings in my house always meant one thing: “our shows” on TV. We are of Indian descent, and the sounds of the latest Bollywood hits were a staple of our Saturdays and Sundays, as much a part of our weekends as omelettes and the newspaper. But for all the nostalgia, we had little choice. For years, if you were an immigrant looking for your own media, your only other option was one of the “ethnic” grocery-cum-video stores that still pepper neighbourhoods today. And while these shops function as impromptu community centres, there was always something a little unsettling about having to drive to an out-ofthe-way plaza only to pick up a poor-quality knock-off DVD. 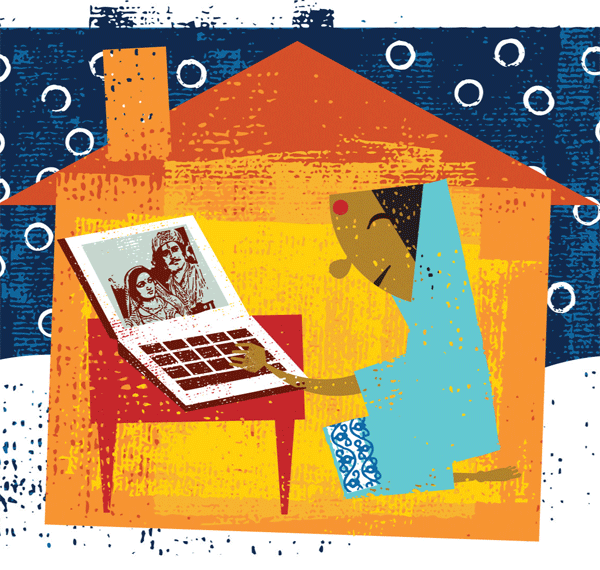 The web allows immigrants to straddle two worlds like never before. Illustration by Matthew Daley

It was a disquieting state of affairs that only added to the isolation so common to the immigrant experience. But thanks to the web, things are changing. Minorities are no longer confined to gathering around a TV on weekends or driving to the nearest bazaar. With the mainstreaming of the internet, immigrant minorities have exponentially more access to film, music, and literature from their root cultures.

The difference in diversity between traditional and online outlets is striking. Zip.ca, Canada’s most popular online DVD service, currently has 728 Bollywood films available, which, last time I checked, is approximately 727 more than at my parents’ local Rogers Video. Walk into a Best Buy or HMV and you will be lucky to find a handful of “world music” CDs. In contrast, eMusic.com, Canada’s second-largest online music seller behind iTunes, currently has more than 33,000 artists under their international category. The disparity is staggering.

At the core of this pluralist promise is the “long tail.” Coined by Wired editor Chris Anderson, the term describes how the web’s massive capacity as a distribution network, coupled with its greatly reduced cost of delivery, allows online retailers to offer a much greater variety of content than bricks-and mortar stores. Rather than relying on selling huge quantities of a few blockbusters (the head), the theory suggests that online stores can thrive by selling just a few units each of a huge catalogue of titles (the tail). But though most of the technorati have focused on the long tail’s economic benefits — which might not be as lucrative as once predicted — few have yet to think through its impact on minority cultures.

After all, beyond merely having more choice, what does it now mean to be an immigrant in the face of this greatly expanded access to culture? My parents’ generation spent much of their life in a sort of cultural limbo. Unwittingly alienated by a majority culture, they sought out the familiar and the known. Yet, the trips to dingy stores around the margins of cities were more symbolic than anyone cared to admit and, despite a growing immigrant population, quality, selection, and currency were all lacking. Put off by mainstream culture and unable to connect with the contemporary culture of their homelands, they were stuck.

Flash-forward to today, and my mother can watch the most current movies from Bollywood at full quality, a few even in high definition. My father has a large MP3 collection composed of ghazals and classical Indian tracks he never thought he would find again. This is just the start: it says nothing of the radio streamed from Taiwan, the news sites from Somalia, the poetry from Pakistan, or the podcasts from Jamaica. The internet allows immigrants to engage in the currents of the cultures they know with an immediacy and range that simply could not have happened before.

The obvious danger is increased ghettoization. But in an unexpected way, the web allows for an equality of participation. The ebb and flow of media, the contemporary pulse, was once privy to those with Globe and Mail or Saturday Night subscriptions. But, though it is perhaps anecdotal, it seems no coincidence that, after finding Bollywood clips there, my mother also turned to the web for reports on the U.S. election or video from Oprah.com. Suddenly a part of the swirl of popular culture, my family’s cultural isolation lessened.

If minority alienation is a question of access and inclusion, then perhaps more than anything, the long tail means that the choice between assimilation and traditionalism has ceased to be an either/or proposition for immigrants. When one is no longer forced to cling to an imaginary past but can instead engage the cutting edge of both cultures, the movement to the contemporary Canadian becomes degrees easier and less threatening.

The web in itself might not be a magical panacea, but when immigrants are neither asked to constantly look back, nor entirely conform to an alien present, perhaps the ideal of multiculturalism has found a practical friend in the long tail of the internet.