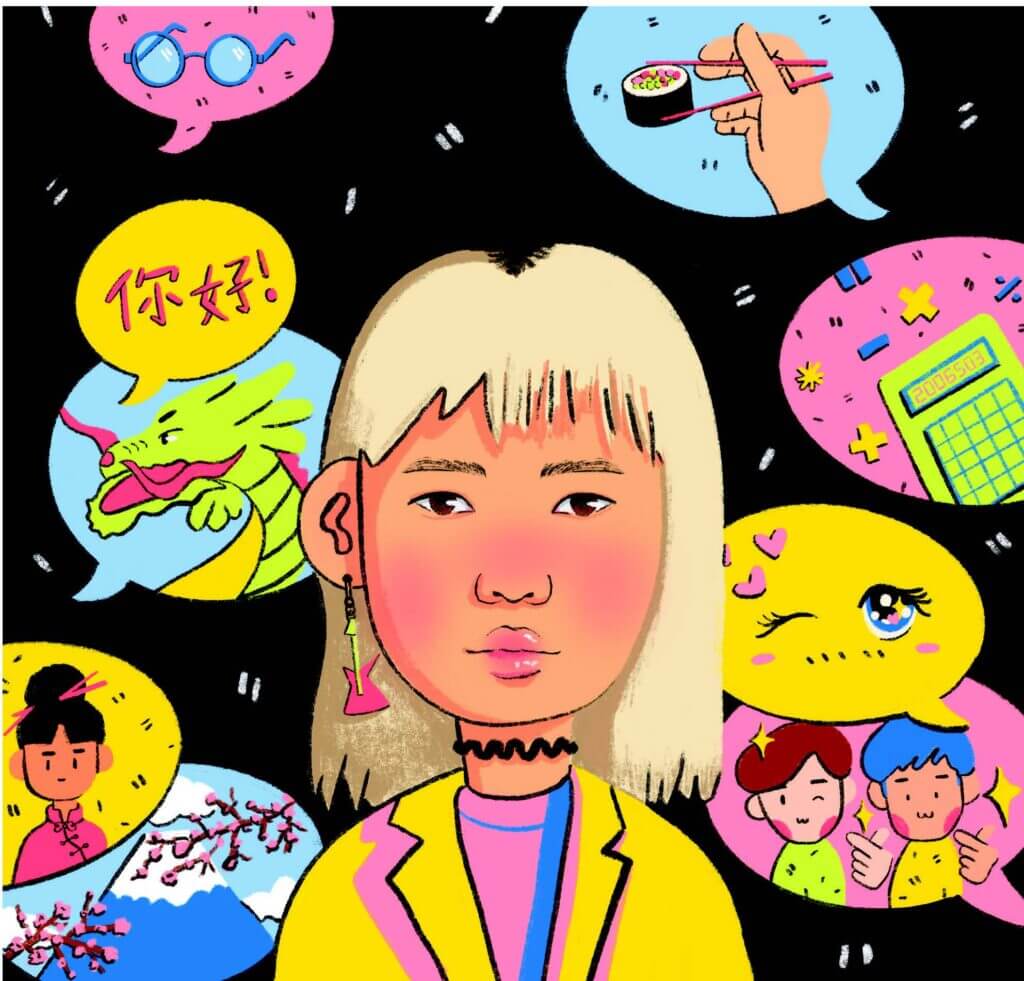 “It’s not like you even act that Asian”—these words were spoken to me by a white now-ex-boyfriend of mine during a casual conversation. At the time, I let it go because I was not sure how I felt about it, but the words have stuck
with me.

How exactly am I supposed to act “more Asian”? And why is that something I am expected to perform? Do I need to dress up as Hollywood’s idea of a dragon lady before I am allowed to bear my cultural identity proudly? Strangers and friends alike will, unprompted, comment that I act pretty “whitewashed.” They’ve explained: it’s because I dye my hair, or I was an arts major in university, or that I like listening to punk music, or some other asinine reason. However, this is a loaded congratulations to me, insinuating that, despite my appearance and perceived hardship of being a person from a visible minority group, I am able to fully assimilate into Western society, which is apparently the true marker of success. Being called “whitewashed” is not the compliment that some people think it is.

Although I am usually happy to share my opinion or personal lived experience as a Chinese woman who was born in Canada when I’m asked to, there are times when I’m not willing to do so. I won’t engage when these questions come from strangers or people who are just looking to argue, rather than genuinely listen to my answers.

When non-Chinese strangers or salespeople approach me by saying “Ni Hao” in mispronounced Mandarin, I wonder what exactly their goal is. Are they actually attempting to connect with me and make me feel comfortable in what they think is my mother tongue, or is it to make themselves feel cultured because they want to show off the fact that they know how to say a simple “hello” in another language? Usually, it seems to be the latter. In some cases, I may humour them by responding in Mandarin, after which they will admit that they don’t actually know how to speak it. Other times, when I’m not in the mood, I’ll explain that had they asked and wanted to have a conversation with me, I would’ve told them that my mother tongue is actually Cantonese and I am not as fluent in Mandarin.

And then, if people want to speak to me in Cantonese, do they have a basic understanding or even an honest desire to learn, or are they just looking to learn the swear words so they can have a fun party trick? These are also things that can be learned on the internet for free, instead of asking me to invest my time and energy into a moment of entertainment that I do not share in.

When I worked at an all-you-can-eat sushi restaurant, it put me in the frustrating position of working in a customer service role where I was required to be as polite and accommodating as possible to guests, even if they were rude or ignorant. Guests would compliment me for my English-speaking skills, remark on my lack of accent, or ask me where I’m from—no, where I was really from. Many were disappointed to hear that I’m not Japanese and that, in fact, I was born and raised in Canada. My place of birth shouldn’t even be a talking point when I’m working as a server at a restaurant, and I doubt that white servers are asked about their ethnic origins at work. Sometimes I would just tell them what they wanted to hear and make up a backstory for the most gullible. After all, they came to have an authentic cultural experience and eat California rolls at a Japanese restaurant, and in their minds, that experience is included with the all-you-can-eat menu price.

My coworkers would often try to placate me after these situations by saying that those ignorant guests were harmless. And while I can understand that those customers might have been well-meaning, it doesn’t excuse the fact that they expect me to fill a stereotype and that they are looking to receive some sort of approval from me as an Asian person, to validate that they are somehow more cultured than the average person.

Once, a man came into the restaurant while I was working, showed me a picture on his phone, and asked me if I could
translate the words on the Asian tapestry that he used to decorate his living room. I explained to him that I could not read it because he had walked into a Japanese restaurant owned by Chinese people, and it was written in Korean. He left without ordering anything. These types of microaggressions may ultimately be harmless, but they are unsettling. I am not on call to perform Asian-ness.

Even friends and acquaintances will call on me to perform. People I’ve just met will tell me how much they enjoy Asian cuisine or that they watch anime or that they listen to K-pop—as if I’m the authority on these topics and earning praise from me will validate their interests. Of course, these people never make equivalent comments to my white friends who are at the same party as me. They get to engage in reasonable small talk about their hobbies or work, while I get to listen to someone talk about their upcoming trip itinerary to Japan (where I’ve never been and can’t offer any travel advice about). Whether it’s consciously or not, people will seek validation from me—and I’m sure it happens to the majority of other individuals who are a part of a visible minority group.

This brings me back to the first comment. How exactly am I supposed to act “more Asian”? Being Asian is an experience that I actively live through— it isn’t a choice I make. It’s something that people expect of me based on my appearance. I should not be expected to explain myself to strangers and ignorant acquaintances. I’m proud of who I am, but it’s not the only facet of my life that I ever want to talk about.

I didn’t grow up to be a stereotype. There is no right or wrong way to be Asian. I’m not your anime dream girl. I’m not your Hollywood dragon lady. I’m not your idea of a model minority citizen. I’m not here to meet your expectations—there isn’t a point where I don’t act Asian enough to fit into your idea of who I am—and I do not have to do the emotional work to prove myself to anybody.