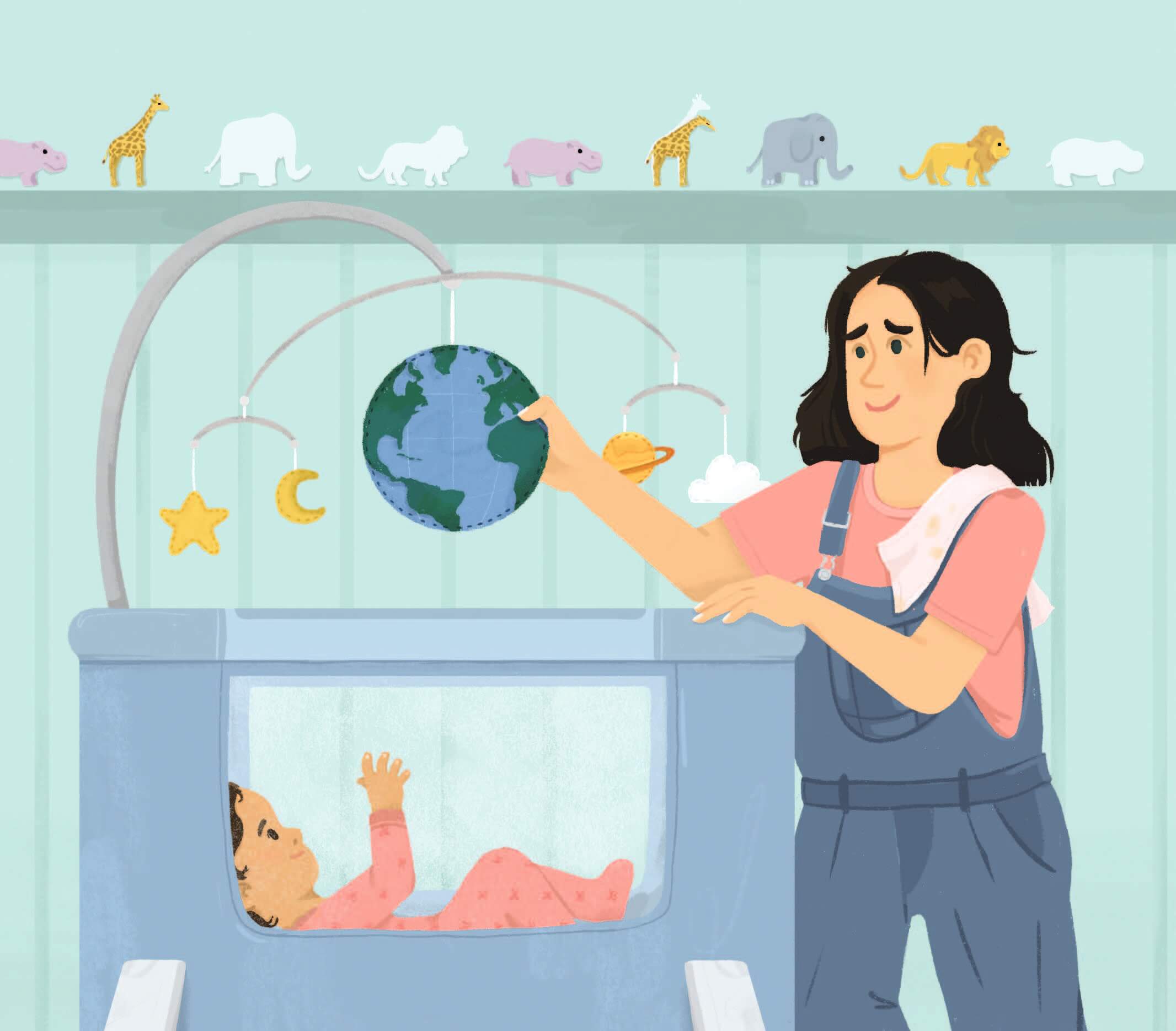 I’m a young woman, who can, to my knowledge, get pregnant and has long-held dreams of being a mother. When I was a child, I spent my days dutifully caring for my dolls—who were named Baby and Popstar. When I turned 13, I started babysitting the two toddlers who lived next door. When I moved to Ottawa to study, I volunteered at Planned Parenthood, spending my off-time supporting pregnant folks who were looking to explore their options. In other words: I’ve spent my life to date surrounded by themes of reproduction, children, and family planning. But, these days, when I think about being a mother myself in the future, existential anxiety creeps into me—a paralyzing fear of having children in a world in rapid ecological decline.

I am 22 years old. I want to have a child sometime in the next decade. But what will the world be like when my prospective child is growing up?

The planet is in trouble. We know this. Sea levels are continuing to rise, Arctic sea ice is in decline, and the earth just keeps heating up. In 2016, the late Stephen Hawking famously predicted that humans have 1,000 years left on earth. It feels like everything is falling apart around us.

A thousand years is a long time, but I think most conscientious, climate change-believing people, myself included, are less concerned about the number, and more concerned about the symptoms of earthly decline and what it means for the human species. Will my child’s world be plagued with wildfires, floods, and rapidly declining air quality? Will their favourite animals be extinct, and will rural landscapes be covered by skyscrapers and freeways? As the 1,000 year-mark draws closer, what will the symptoms of a climate apocalypse be, and how will this burden weigh on my child?

The crux of pre-parental climate anxiety is extreme uncertainty. Will my child wind up in the care of a spaceship operated by Jeff Bezos to transport eight billion humans to Mars? Or, more realistically, will they be able to afford the likely seven-figure price tag for the Apocalypse Express to escape this dying planet?

The dread of earthly decline is quite terrifying, and this kind of anxiety is hard to prepare for. I’ve had panic attacks over school, family, relationships—all of which can be soothed or reasoned with. But climate anxiety is different. I can talk myself out of alarmism, but the general concern over a dying planet is actually quite rational.

Let’s look at my parents’ generation—was ecological decline even a thought? Probably not. The dominant thinking was clear: so long as you weren’t out of wedlock and had the means to care for a child, you were all set. Granted, abortion access was limited, heterosexuality was compulsory, and the risk of disownment and/or ostracization in the case of having children out of wedlock was actually quite substantial. But still, this is the second terror of climate anxiety— there are really no elders to empathize with you. It’s a first-of-its-kind anxiety. Perhaps if you speak to the Cold War generation, you could get a little bit of insight into apocalyptic anxiety more generally, but the idea of the world dying beneath our feet is a novel prospect.

Cue the resentment. Why did I have to be born in the ’90s, the last generation for which climate wasn’t at the forefront of our tiny little childhood brains? And why does my prospective child have to be born in the 2020s or 2030s, when climate terror is probably going to be seared into their brain in utero? Feeling resentful about this timely predicament is something I’ve come to realize is quite normal. I’ve spoken to my 20-something girlfriends and it’s not unique. If we had been able to have children just one generation earlier, it seems like we could be mothers in blissful ignorance.

So here I am: ability to reproduce, likely. Typical childbearing age, check. Full confidence that my child will have a safe and sustainable environment to grow up in? No. I’m working through it. Alarmist thinking is common with climate anxiety. I don’t think anyone should feel guilty for having a child in 2022. In fact, I think new, unjaded, and change-focused humans are the most likely antidote to climate change. Also, if I’m being honest, these past two years of the COVID-19 pandemic have made me even more certain that despite great loss, communal mourning, and pain, humans can make it through. We just need to be on the same page (which is a big feat, I know).

I also can’t ignore the bittersweet side to this climate anxiety: it’s made me infinitely more empathetic to my fellow humans, and to the earth I walk on. I’m grateful for things I don’t think earlier generations even noticed: the air I breathe, the water I drink, and so on. I also use this anxiety to fuel much of my everyday work toward climate justice. I don’t think I would be as interested in living sustainably and building community as I would be without climate anxieties. Climate anxiety and subsequent climate activism have, in many ways, helped me to unlearn the hyper-individualism that capitalism taught me. I can only hope that this belief in community and radical empathy is also passed on to my child and their generation.

So, it’s not all bad, but it can be pretty bad. But let’s be clear—if I didn’t want to work through it, I think that’s okay, too. If I didn’t want kids, then the childfree life would be for me. But that’s not me. I want kids, but I want kids in a world that isn’t doomed. So, until my child is brought into this world, I will be spending my time working toward creating a world where they will be safe and be able to thrive.