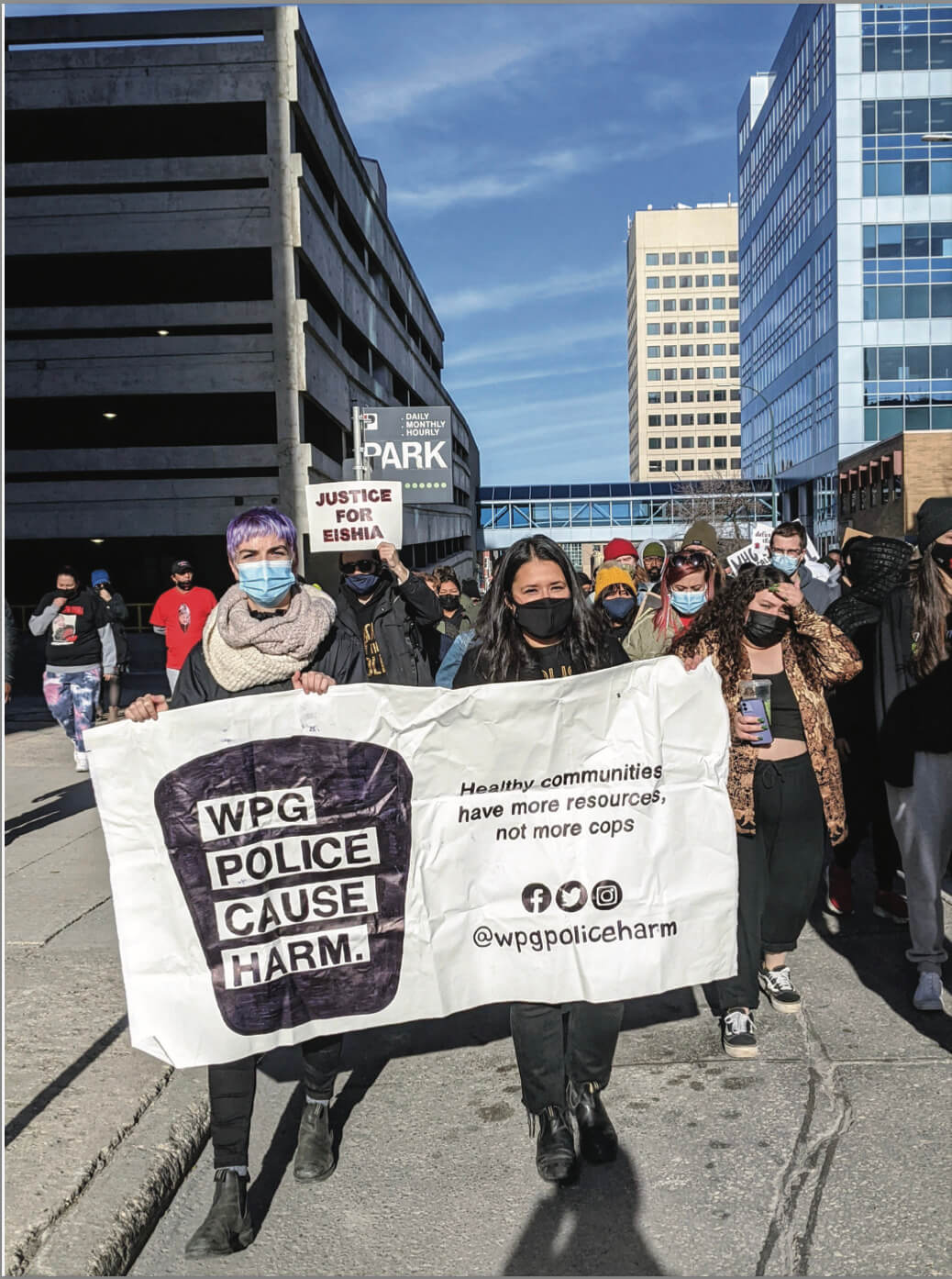 Picture this: you’re ready for a good night’s rest. You crawl into bed around midnight, and just as you are about to fall asleep, thunderous juddering and whirring erupt above your house. You sit awake, startled as the Winnipeg Police helicopter circles around your neighbourhood, its bright spotlight creeping and surveying. This disruption is a regular occurrence for you, one that leaves you anxious, overwhelmed, and exhausted. According to the activist group Winnipeg Police Cause Harm (WPCH), this is a reality for many Winnipeg residents.

WPCH began its work in September 2019 after the murder of four BIPOC people at the hands of the Winnipeg Police—Chad Williams, Machuar Madut, Sean Thompson, and Randy Cochrane. The volunteer-based, non-hierarchical group advocates for the abolition of the Winnipeg Police Service (WPS) and the reallocation of its funds to community-led alternatives.

“I think a lot of us recognized that there truly were no present organizations or groups or anything [in Winnipeg] pushing back on these things,” says Nickita Longman, an activist working with WPCH. “The reason why we all got together was because we really wanted to address that.”

Raising consciousness and community engagement are two key pillars at the heart of the group’s work. WPCH has presented to city council and the Winnipeg Police Board, distributed posters, created “Know Your Rights” wallet cards, and amassed a following of over 9,000 on Instagram alone as of January 2022. WPCH’s community efforts led to its designation as Winnipeg’s favourite grassroots group by local Winnipeg newspaper The Uniter in 2021, despite working under the pandemic’s restrictive parameters.

“There’s a lot of our work that does better in person and does better in community,” says Longman. “We had to really be creative with the ways we were present online.”

Based on the survey’s results, WPCH created a map showing where the Winnipeg Police Service’s helicopter heavily circulated—predominately the north and west ends—in comparison to areas cops reside. WPCH shared the map with helicopter operating costs on its website, corresponding with its “Porkchop Prices” Twitter account to raise awareness on how the WPS’s helicopter use detracts from other valuable community resources.

“The cops have been saying only four people a year complain about [the] noise,” says James Wilt, another organizer with WPCH. “We know, based on the survey we did … hundreds of people care very deeply but just don’t have a mechanism to respond.”

When WPCH made their case to the Winnipeg Police Board, they read the anonymous complaints word for word. In response, the police conceded by posting an official form on their website that submits complaints directly to the head of the helicopter unit.

“Our hope is that we can eventually get hard numbers on people filing complaints,’’ says Wilt. “We didn’t get the helicopter grounded or sold, but we hope the outcome will raise consciousness.”

WPCH is eager to continue building its community presence. They hope to coordinate events in March 2022 on the International Day Against Police Brutality and in April 2022 to commemorate the deaths of Eishia Hudson, Jason Collins, and Stuart Andrews—three Indigenous people shot and killed by the Winnipeg Police over 10 days in April 2020.

Getting back into the community will also involve tabling at local events. Wilt shares that tabling has given WPCH the unique opportunity for face-to-face engagement with people who sometimes offer their opinions, stories, and experiences with the police.

“I think having the feeling that someone cares about what happened is really significant even if we can’t do anything about it,’’ says Wilt. “Just being a set of ears is helpful.”