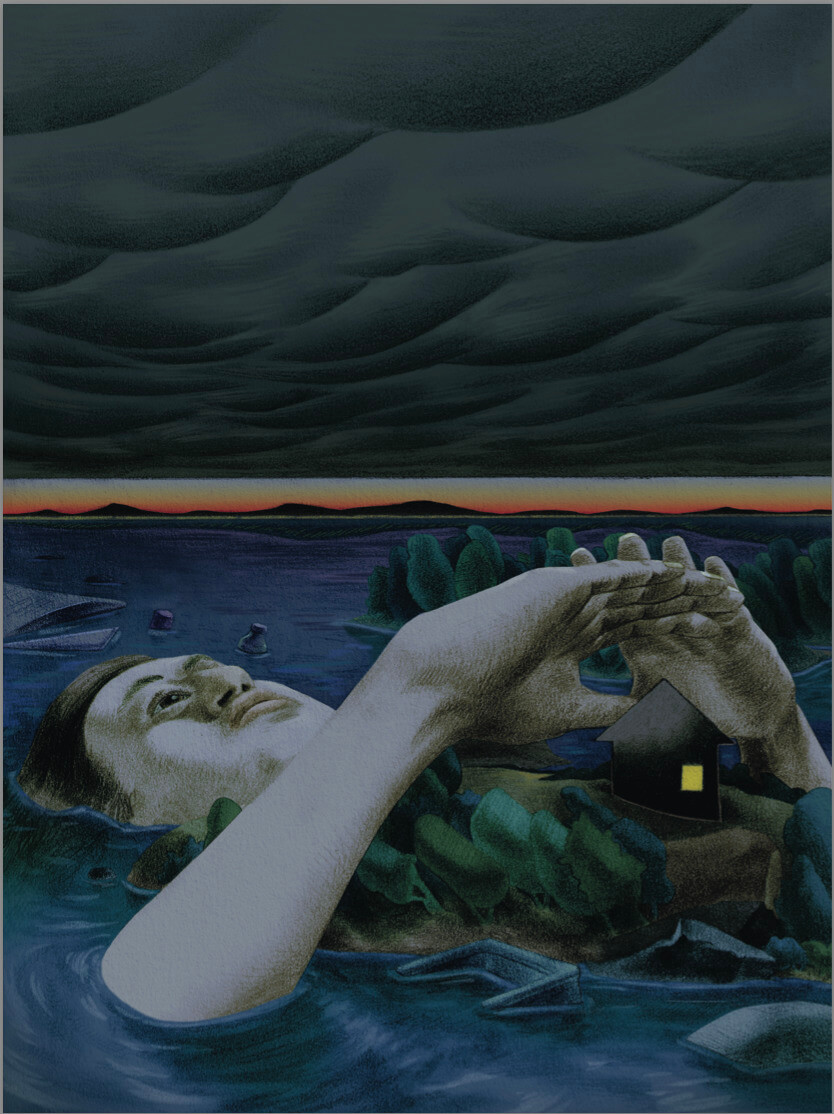 I grew up surrounded by a family of storm enthusiasts on the east coast of Canada, where I developed a fluency in the threat of tropical storms, hurricanes, and winter storms. Each weather system evolved according to its own unique before, during, and after. For me, each event was a coupling of fascination and fear, and my interest in science and my experience living with anxiety and obsessive-compulsive disorder (OCD) stoked this preoccupation. At present, I live on Treaty 7 territory in the city of Calgary, which is located around the confluence of two rivers, the Bow River and the Elbow River. The Blackfoot name for this place is Moh’kins’tsis.

Both rivers experienced flooding in 2013. At the time, my husband and I were renting a small, character house that was just a stone’s throw away from the Bow. Only the street and a modest green space separated us from the river. This was supposed to be an exciting time. In just under a week we were set to become homeowners. We expected the move to be hectic, but we didn’t plan on dealing with a natural disaster during the transition. I cut my workday short on June 20, 2013. I was concerned about the unfolding situation and decided to take the opportunity to move some items from our basement to the main floor. I asked the property owner what to do to protect the house, but he didn’t seem worried and explained that the house had been fine during the 2005 flood, so he thought it would probably be okay this time too. In advance of an official evacuation notice, we decided to spend the night with friends across the city as a precaution. We packed our hatchback with cherished art, family heirlooms, and our cat and dog, and crossed our fingers.

According to the City of Calgary, the Bow River swelled to “eight times its regular flow rate” during the peak of the 2013 flood. This still fell “within the natural range for the Bow River,” but the last flood of comparable magnitude had occurred 81 years prior in 1932. Unfortunately, the rental house wasn’t spared. The main floor was okay, but the basement filled with several feet of water. The first sign of trouble during our initial re-entry was a cluster of floating plastic bins around the top of the staircase leading down to the lower level. After some clean-up assisted by family and neighbourhood volunteers, we left the old house behind and settled into the home we purchased, but a new obsession focused on the destructive power of water continues to follow me almost a decade later.

I have lived with anxiety and OCD for as long as I can remember. As a young child, I strived to keep things in pristine condition, I almost never lost things, and I regularly second-guessed my decisions. As an older child, I established routines to check that appliances perceived as fire hazards were turned off and to lock up the house on my way to school. I sometimes risked missing the school bus to rush back and check the front door and if I didn’t have time to go back and check, the worry would sit with me all day. These behaviours continued into my adulthood—and moving away from home, making large purchases such as vehicles, and independently completing important tasks such as taxes increased the stakes. I am a geologist and geographer, and before enrolling in my current graduate degree program researching the carbon cycle, I worked as a geologist in the oil and gas industry. My career trajectory has included work in field, laboratory, and office settings and my professional experience often involved decision-making that had real-world safety or monetary considerations. One of the manifestations of my OCD in the workplace is excessive worry that I have made errors in my work and that these errors will negatively affect my colleagues or compromise workplace safety or security. This list might seem like a lot, but it boils down to a common element—checking and double-checking that things are accurate, safe, and complete. This experience is not unusual. The Canadian Psychological Association’s “Psychology Works” fact sheet for obsessive-compulsive disorder estimates that about one percent of Canadians will experience OCD at some point in their lives and lists “checking” as a common type of compulsion. The checking compulsion is carried out in response to obsessive thoughts, which in my case include fears of harm to others or myself, and damage to my home, the homes of friends and family, or my workplace. Engaging in checking behaviours can be disruptive. I have been late for work, school, and social commitments because of checking. In extreme cases, I have skipped activities altogether because preparing to leave home was too stressful.

At different points in my life, I have received different types of treatment for anxiety, OCD, and associated depression. At present, I find myself living in relative peace with OCD. I maintain a slow schedule and prioritize tasks to complete with increased focus and intention to keep a low baseline stress level, so I have capacity to cope with stressors and challenges as they arise. (My life with OCD is always in flux, so this strategy may change in the future and is not intended as a how-to or as medical advice for others.)

My equilibrium is most easily upset by rapid change, uncertainty, and perception of harm. Extreme weather events can develop quickly, evolve in unpredictable ways, cause significant damage to property and the environment, and be hazardous to people and pets. A good storm checks off all of the criteria to trigger my personal brand of anxiety and OCD checking responses. Calgary has no shortage of extreme weather and natural hazards. Each season features its own cast of potential disasters: blizzards and extreme freezing temperatures in winter, heavy rainfall and flooding in spring, tinder-dry conditions and severe thunderstorms equipped with large hailstones in summer, and early snow and cold conditions in fall. As a province, Alberta is intimately familiar with the impacts these types of extreme events can have on the landscape and the people who live there. In August 2020, The Weather Network published an article called “Top five costliest Canadian natural disasters of the decade.” Unsurprisingly, Alberta’s fires, floods, and hailstorms occupied four of the five spots. A summary of the “Top Insured Damage Severe Weather Events in 2020” released by the Insurance Bureau of Canada shows a similar story, with Alberta flooding and storms taking three of six places on the list.

Extreme weather and natural hazards are part of living in Alberta and my obsessive thought patterns and compulsions reflect the perceived risks associated with my surroundings.

I don’t leave windows open when I leave the house in case of a sudden storm; I wake in the night to check the leaky patio door during the rainy season, and I check—and check again—pipes and walls for signs of freezing during periods of deep cold. These may seem like reasonable actions to prevent damage or catch issues early, but the problem lies in the disruptive nature of the checking behaviours and the amount of time they occupy, as well as the distress experienced if I don’t engage in the routines. These behaviours also cause tension in relationships and may be a source of conflict when family members don’t agree on what is justified as worrisome.

My OCD changed because of my experience during the 2013 flood and my obsessive thoughts now include worrying about water damage. I more frequently incorporate checking faucets and other water-related elements into my routines, and as extreme weather events become more frequent with climate change, I expect this personal trend to continue.

Greenhouse gas emissions, including carbon dioxide (CO2), and related increases in average global temperatures have caused increases in the frequency and intensity of extreme events such as heavy precipitation and associated flooding, droughts, and some storms, as well as changes to temperature extremes. The Intergovernmental Panel on Climate Change (IPCC) recognizes these connections and its latest report, Climate Change 2021: The Physical Science Basis, explains that these effects will continue with additional warming. This report is approved and available from the IPCC, but is subject to final revisions, as detailed on their website. In its Summary for Policymakers, the IPCC reports that “global surface temperature will continue to increase until at least mid-century under all emissions scenarios considered.” This includes a scenario where all greenhouse gas emissions are low and CO2 emissions are lowered to net zero (reduced to zero or offset by removal) around 2050 and dip into the negative after that, which means CO2 removal from the atmosphere would exceed emissions. Right here at home, the Government of Alberta says that climate change may increase the “frequency and/or intensity” of forest fires, droughts, heavy precipitation, and associated flooding, and severe storms on an individual basis. This outlook is sombre from my OCD perspective. None of the trajectories considered by the IPCC can provide immediate relief and the changes in my home region are expected to include more frequent OCD-triggering events. Thus my extreme weather and climate change-focused OCD is likely to persist.

There is clear evidence linking climate change to mental health concerns and work such as researcher Susan Clayton’s 2020 article, “Climate anxiety: Psychological responses to climate change,” demonstrates this while highlighting that the effects on mental health may be both direct and indirect. More specifically, I am not alone in recognizing connections between OCD, weather, and climate. In their 2012 article, “The impact of climate change on obsessive compulsive checking concerns,” Mairwen K. Jones, Bethany M. Wootton, Lisa D. Vaccaro, and Ross G. Menzies discuss the experiences of 50 people with checking OCD and report that 28 percent of participants had “OCD concerns directly related to climate change.” Most of the participants engaged in checking behaviours motivated by worries of wasting water, gas, or electricity that would further contribute to the climate emergency, while others were concerned about potential harms caused by climate change and engaged in checking related to perceived negative consequences. My experience is most closely aligned with that of the participants worried about the impacts of climate change, with an emphasis on the increasing frequency and intensity of extreme weather events and natural hazards. The researchers acknowledged that OCD can be affected by external factors, which is consistent with my experience. Jones and colleagues explain that, to the best of their knowledge, their research on climate change and OCD checking is the first study of its type. This highlights the novelty of this type of narrative in discussions about living with OCD and suggests that more work is needed to understand this facet of the OCD experience and what the future might bring for people living with OCD.

These days, I feel like I’m on the cusp of a new era of my OCD and anticipate a future reckoning. I plan to draw on the strengths of my OCD to help me navigate what’s to come, even though I don’t know what that will look like. It’s important to recognize that my OCD is not all about anxiety and disruption; it also comes with a thoughtful mind, deep honesty, and a sense of responsibility to my community. I am skilled in anticipating challenges in all areas of my life and taking preventative action to minimize negative consequences for myself and those around me. My competence in risk assessment and attention to detail gives me an advantage when it comes to emergency preparedness, though, looking forward, I’m not sure what exactly I’ll need to weather the next storm.