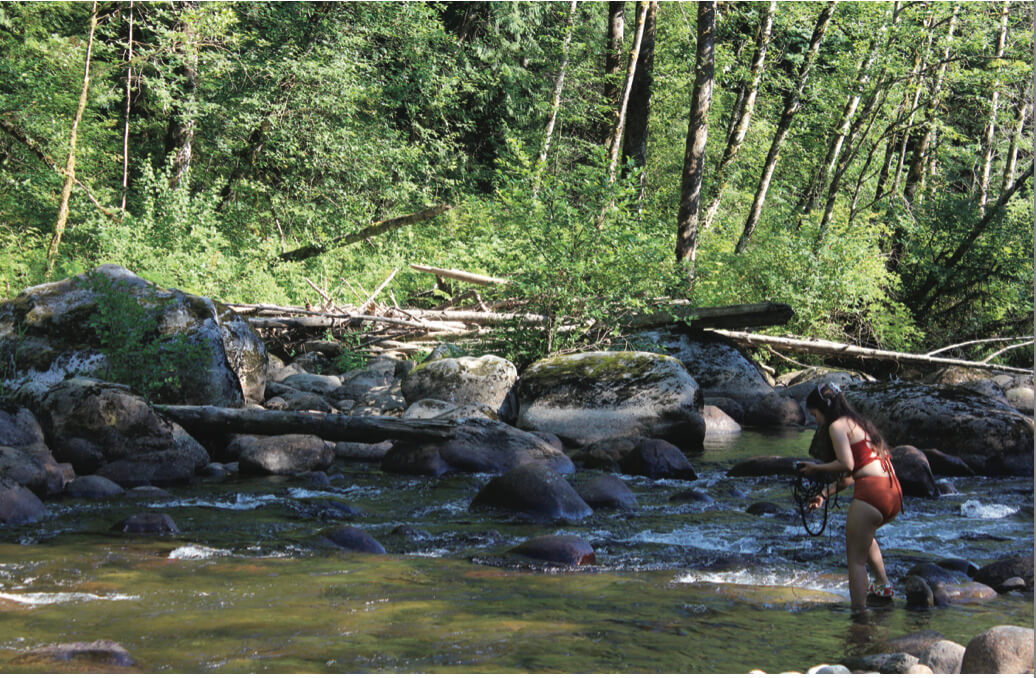 Art and activism are necessary to sustain hope, especially in hard times like the present. In June and July 2021, poets Rita Wong, Emily Riddle, and Sacha Ouellet joined me to record the audio project “From the Prairies to the Pacific Rim,” a poetry exchange and conversation about waterways and the Trans Mountain (TMX) pipeline project, which connects us spatially across western Canada. This audio segment launched as a podcast and was featured at Vancouver’s Powell Street Festival last year. It weaves together a rich conversation featuring poetry and discussions on identity, culture, politics, and climate issues. Amidst varied relationships to land and migration, the four of us exist in a hybrid space as poets, organizers, and community members, the intersections of which shape the project.

“I’ve been thinking a lot about climate grief, and just like grief, as all these residential school sites are investigated further … I don’t think people understand that those things are so intimately connected,” Riddle says, from the eastern side of the pipeline in amiskwaciwâskahikan, or “beaver hills house,” also known as Edmonton. Whether it be fossil fuels or beaver pelts, the removal of Indigenous people is intrinsic to resource extraction and commodification in Canada. “I don’t think most people would connect those two things at all—children were removed in order to have these developments [on the land].”

Wong, who is also an educator, believes “it is not too late … to repair relationships that should have been better in the first place” and that “part of the work is to educate ourselves on what we should have learned all those years ago.” Wong’s recent work in community has included supporting 1308 Trees, an art project raising awareness about the trees being cut down by TMX in Burnaby’s Brunette River watershed, and writing about on-the-ground land defence at Ada’itsx (Fairy Creek). “My family comes from the Pearl River Delta in Southern China and wherever we happen to live, I think it is important to understand or try to learn about the waterway that we are part of.”

While sharing poetry, Ouellet reads a poem that honours her relationship to fireweed, a companion found growing both where she lives in Vancouver, and more rurally up north, where she has spent time at the Unist’ot’en camp and in her homelands of Gwaii Haanas. She asserts belief in “the power of love for the land and love for each other, compassion for the land, and also, knowing, while Mother Nature is having reactions, the end of the world isn’t here.” This segment also includes Wong’s poetry from undercurrent (Nightwood Editions, 2015) and new work from Riddle’s forthcoming chapbook with Glass House Press. Each respective poem offers a witnessing of the self and others in relation to care for these occupied lands and waters.

One of the most notable layers to this project is the sound of waterways. The audio features soundscapes from salmon-bearing rivers, creeks, and lakes from the Wedzin Kwah, Holmes Creek, Brunette River, Burnaby Lake, skʷƛ̓əma:ɬ stál̕əw̓ (Coquitlam River), and Kwekwecnewtxw (also known as the Coast Salish Watch House—next to Silver Creek), each of which are currently being affected by major development, resource extraction, and transportation projects, including TMX, Coastal GasLink, and CN Rail.

As someone who grew up alongside the great Stō:lo (Fraser River), I see this work as part of my own relationship-building to the lands I occupy. In the coming months, I intend to keep writing new work in response to the rich and generous conversation exchanged with Wong, Riddle, and Ouellet.

In the meantime, “From the Prairies to the Pacific Rim” has been released for free on SoundCloud. While the news blasts doom and gloom, artists, activists, policy makers, and everyday people continue to make change in little ways each day.

As Ouellet proclaims, “it can feel very hopeless but it is not, I promise you.”

The full audio of “From the Prairies to the Pacific Rim” with Rita Wong, Emily Riddle, and Sacha Ouellet can be streamed at soundcloud.com/ehiroko.